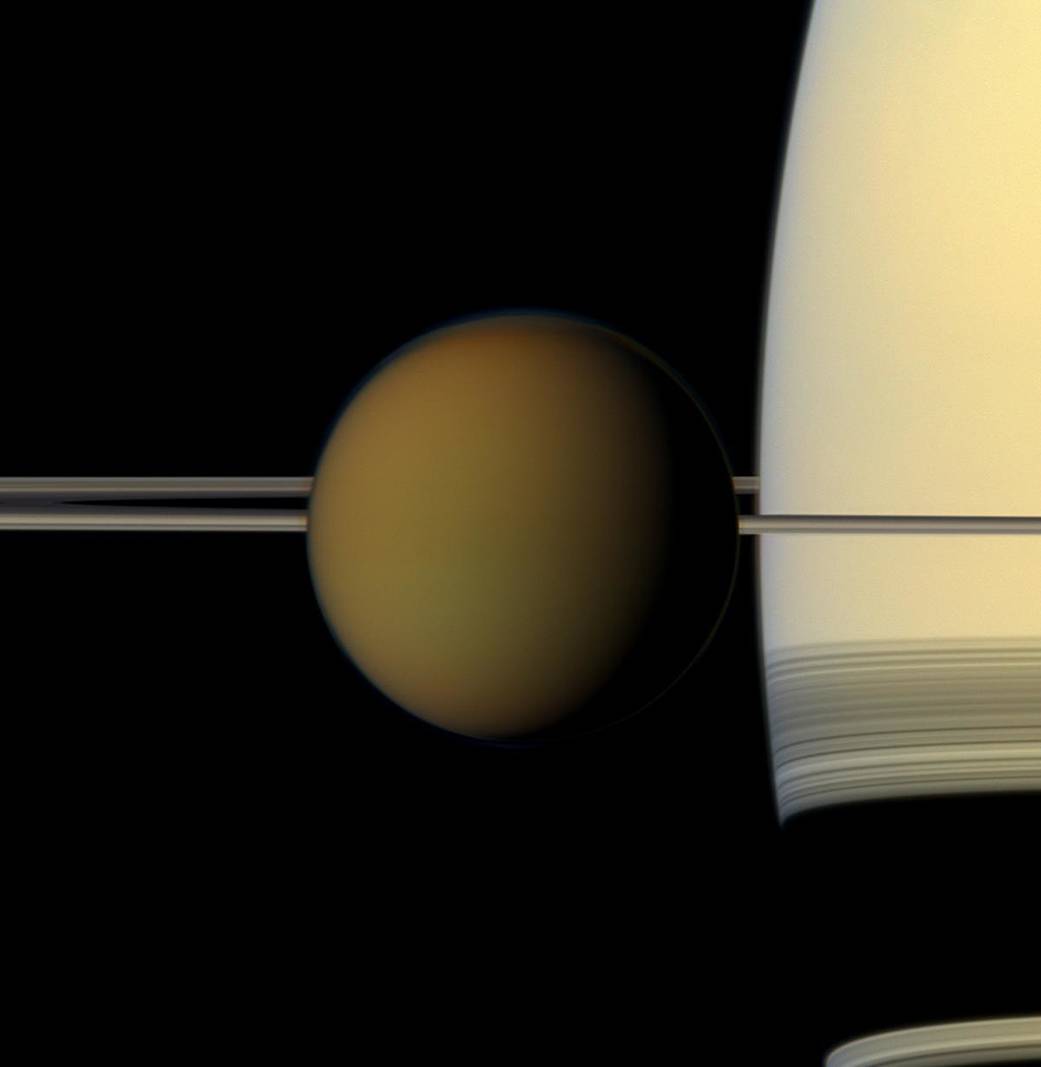 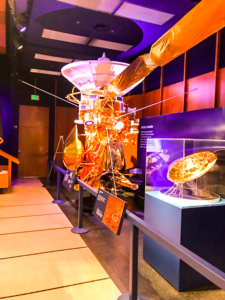 Cassini was originally envisioned as a spacecraft that would explore Saturn after a seven year voyage traversing the distance between earth and her ringed neighbor in the solar system. What evolved wasn’t just another mission: it was a perfect mission that delivered even more than the NASA scientists had dreamed of. NASA’s Cassini Spacecraft Operations Manager Julie Webster put it into musical context in likening the experience to the Moody Blues song, “In Your Wildest Dreams“.

The findings of the mission are nothing short of spectacular. As are the people who have made this happen. For some of the staff, it’s been a 30 year project that came to an end at 4:55:16 am Pacific Time on September 15, 2017 when Cassini transmitted its final burst of data as it turned into an atmospheric probe during its final moments of descent into the Saturn atmosphere.

The end of a mission like Cassini is bittersweet. “It’s  been a thirteen year marathon of scientific discovery, with science that will span a generation,” according to Linda Spilker, Cassini Project Scientist. And this meme of the intergenerational nature of space exploration is one that came up again and again. Within the project, senior scientists are mentoring young scientists. The data delivered will translate into new PhD theses for up and coming generations. And Cassini itself is just the first in a planned succession of explorations to expand our knowledge of life and our universe. 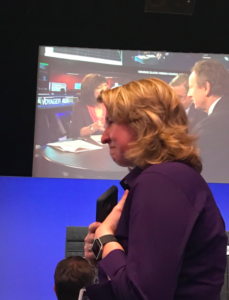 NASASocial’s Stephanie Smith reacts as the Cassini mission is called

The last two days have been a whirlwind at NASAJPL (NASA Jet Propulsion Laboratory) in Pasadena, Ca, as the incredibly friendly and efficient NASA social staff led by Stephanie Smith organized, informed and herded a group of social media space fans through the facility and event. For an aviation fiend like me, this was hog heaven and I’m deeply grateful to NASAJPL for inviting me.

Our first day consisted of a nearly day long tour of the Jet Propulsion Lab (JPL) facility. “The Pulse” a Deep Space Network Sculpture in Building 180 was straight out of StarTrek and one of our first stops. (Speaking of Star trek, one of the #NASASocial participants was a star trek designer for the show. This is, after all, southern California!)

The Pulse is a light sculpture that visually reflects real-time communications between  30+ interplanetary spacecraft missions and the space network: 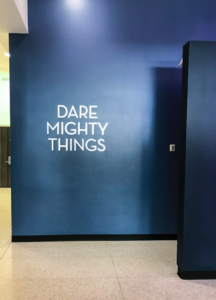 This wall greats visitors as the enter NASAJPL

Upward streams of light reflect communication to a spacecraft; downward coursing light reflects data downloads back to earth. The frequency and rate of activity directly reflects the actual stream of data flowing between the various Deep Space entities. As you stand in front of it, it pulses, sometimes rapidly, then it becomes still. Then it starts again, up and down, as data is transmitted across the universe.

The quote next to the sculpture that greets visitors as they enter, “Dare Mighty Things”, sets the tone for NASAJPL. This is inspiring stuff! And it just get better.

To Dare Mighty Things (not to mention accomplishing them), there is a lot of work and cooperation. The twenty five foot Space Simulation Chamber is just one stop in testing each new spacecraft. 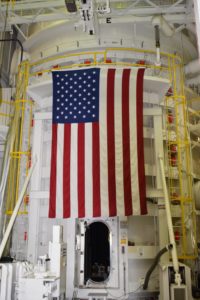 The simulator received National Historic Landmark designation in 1985 from the National Park Service. In this structure, NASAJPL can create a vacuum, test the functioning of various spacecraft components and simulate the deep cold and intense heat encountered in space. This particular chamber has been used in various Hollywood films. The Johnson Space Center has two larger chambers used for similar testing. 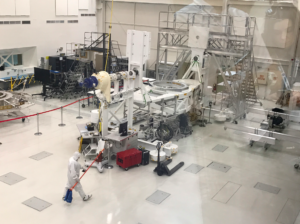 Looking down from the glass gallery above into the Spacecraft Assembly Facility.

The Spacecraft Assembly Facility, housed in Building 179, is  a “clean room” where the spacecraft are actually built.  In the gallery above (you can see our reflections in the picture of the clean room) we learned about Mars 2020 and some of the remarkable plans for that mission. Possibly included in that spacecraft is an extremely high rpm helicopter for Mars missions once the craft arrives on the planet’s surface. 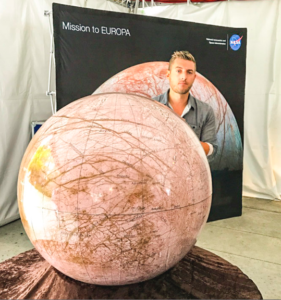 Plans for further exploration include a mission to Europa, the smallest of the four Galilean moons orbiting Jupiter.  Europa has some of the smoothest surfaces observed in the explorations to date, which scientists speculate may be due to an active, regenerating surface, that rapidly erases the evidence of meteor collisions apparent on other, less dynamic planets. This may point to a vast ocean beneath the surface. And that points to the possibility of some of the conditions necessary to sustain life as we know it. More information on this upcoming mission is available on the NASA site.

Also available on the NASA site is a remarkable tool, Eyes on the Solar System. You must download this app. It’s absolutely fascinating.  It allows you to travel to the planets, their moons, asteroids, comets and the spacecraft exploring them fro 1950 to 2050. That means, in the case of Cassini, you can go back to any particular date and time and watch the mission unfold. This is a spectacular tool that allows you to watch twenty years of Saturn (and other) space exploration.

The NASASocial participants were an interesting cross section of people. I think we were each surprised and delighted to be selected for this program. We had educators, Hollywood people, tech and science people, communications people and more. It was a fabulous group bound by a common interest: Space. 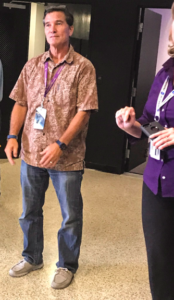 Jim McClure, left, with Stephanie Smith just off to the side in a purple shirt. 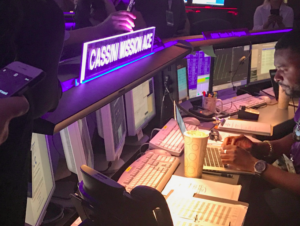 The Cassini Mission Ace in the Mission Control Room.

And we were in good company! The entire staff of NASAJPL scientists were incredibly kind and accommodating. We visiting the Mission Control Room where Jim McClure, Space Flight Operations Facility Manager gave us a fun and informative tour.

In the Mission Control Room, we met the people at the various consoles, such as the Cassini Mission Ace. But perhaps the most fun we encountered was having NASAJPL turn the tables on us!

We’d been wandering around Mission Control, taking pictures and being obnoxious tourists, in our own well meaning way. “Take a picture,” we were encouraged. So, of course we all lined up to take a picture of the technical staff behind the glass pane, that were on Cassini duty. Just as we had our phones and cameras positioned, the ENTIRE staff stood up and took pictures of us! The entire room broke into laughter. 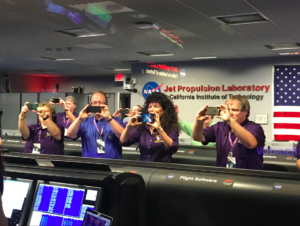 The tables are turned! The Cassini Control Room staff regards the curious tourists outside their glassed in work room. 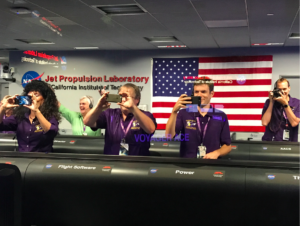 Everyone seemed to get a kick out of having the tables turned!

NASAJPL was fun and incredibly informative too. There are so many interesting tidbits of information to share about this experience:  how using Titan for gravity assist swing-bys allowed for different orbits and extended the range of the Cassini mission; images of the mysterious moons; information leading to new theories of planetary evolution and even possible life.  These and many more pictures, information, stories and facts can be found here on the NASA site. Here are just a few pictures that tell the tale of Cassini, courtesy of NASA: 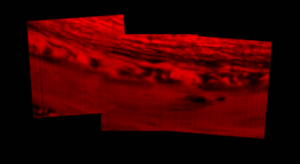 This collection of several images, pieced together, show where Cassini entered Saturn’s atmosphere on September 15, 2017. 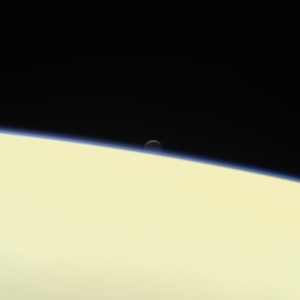 Enceladus sinks below Saturn. Enceladus has vast oceans that NASA scientist are eager to explore. 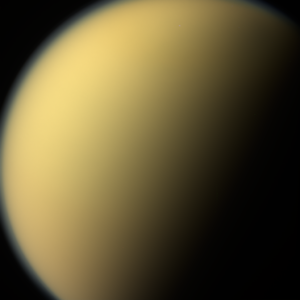 This image of Titan, Saturn’s giant moon, was taken on September 13, 2017 and is one of Cassini’s last images from a 20 year voyage of discovery. 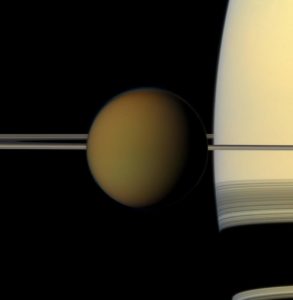 Titan passes in front of Saturn and its rings. This is the actual color. All photos compliments of NASAJPL.

We wrapped up our tour Thursday around 3pm, as scheduled, and prepared to return between 3-3:30 am Friday morning for the finale.

It is just past 2:00 am. NASAJPL isn’t far from where I am staying with friends in Pasadena, but roadwork forces me to take a bit of a detour. The highway is strangely empty. Arriving, I am directed to park in the press section of the parking lot.

It’s close to the auditorium and in the dark I sniff out  the “coffee bar”, a hut in the open patio just behind the auditorium. And just in case the coffee wasn’t enough: 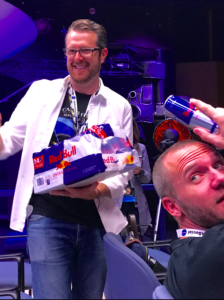 And here is the NASASocial section of the room: 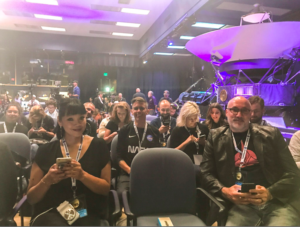 The room is also packed with press, watching the human reaction to the scientific mission as the clock counts down. Some look tired, but emotions run high through the room, particularly among the Cassini staff who wear purple shirts. 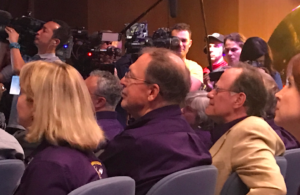 The press focuses on the Cassini teams, watching their reactions to the end of 30 years of effort and exploration. 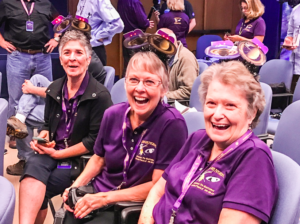 These three ladies have sparkly Saturn headsets to celebrate the occasion. 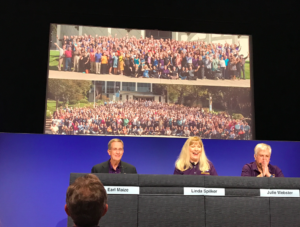 The distinguished panel provides information and updates. And here, a bit of history: these pictures show some of the people who have made Cassini possible.

As Cassini descends into Saturn’s atmosphere, the thrusters grapple to keep its communications beacon pointed towards earth, sending atmospheric information as it descends. As the speed and temperature build, the power of the signal stumbles and fades.

And then it flatlines. 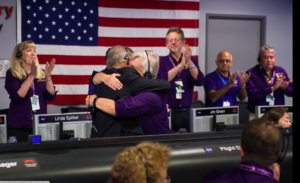 The legacy of the Cassini has just begun.

“The Earth is the cradle of humanity, but mankind cannot stay in the cradle forever.”

KONSTANTIN TSIOLKOVSKY, Final Frontier: The Pioneering Science and Technology of Exploring the Universe

The story behind my incredible adventure with NASAJPL: 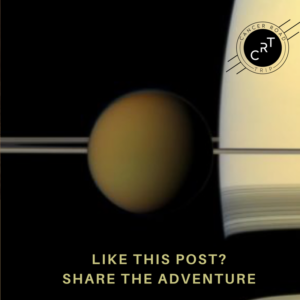