In the Path of the Mayans: Chichen Itza and Chacchoben 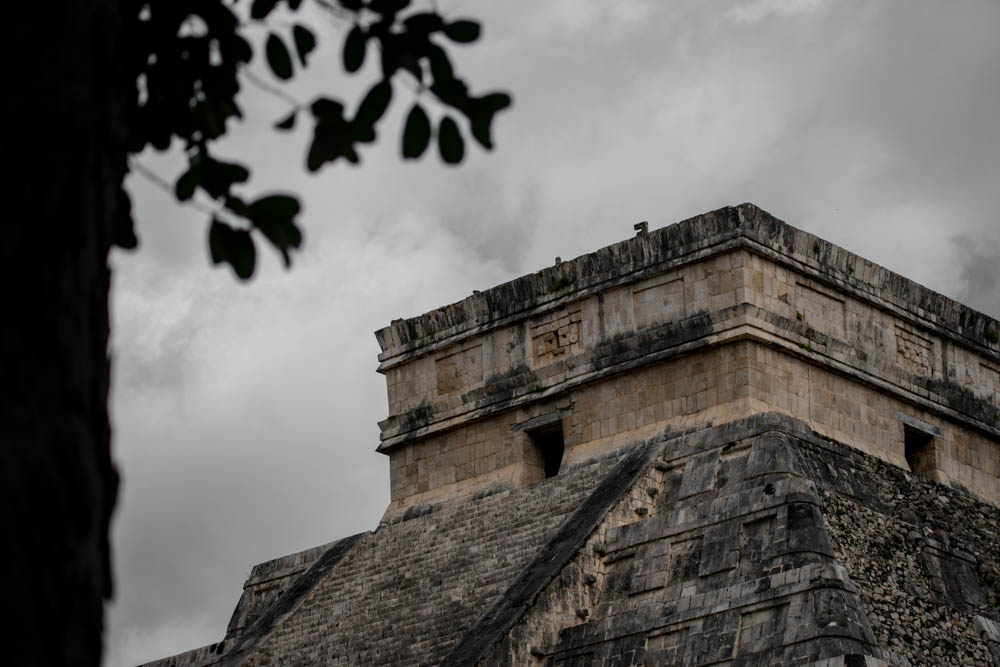 In the Yucatan peninsula, home to the Mayans during the sixth to twelfth centuries, lies Chichen Itza. The name translates as “at the mouth of the well of the Itza“.

The chance to visit this site is one of the things that motivated me to take a cruise. Which is how I ended up visiting Cartagena, Chichen Itza, Panama and numerous other Central American locales.

For me a cruise is a curse and a blessing. I’ve done numerous transatlantic crossings and enjoyed them enormously. But the cruise life just isn’t for me. But more on that in another post.

The waters around Mexico are beautiful. Blue and turquoise, gentle waves beckon. The Yucatan peninsula is arid and flat, with water provided by underground rivers. Access to water is what made the land habitable, and Chichen Itza is located in proximity to four visible sink holes that could provide the water needed for the civilization to flourish through several centuries. The name “Chichen Itza” is believed to refer to the large sinkhole the Sacred Cenote (“mouth of the well of the Itza”) into which gold, jade and even human sacrifices (yes, it was a bloody time) were deposited.

Chichen Itza grew over a period of centuries to become one of the largest of the Mayan cities and a key trade area. The nearby port at Isla Cerritos provided access to trade with Central America as evidenced by products such as turquoise, gold, and obsidian from the Isthmus of Tehuantepec. All were obviously imported from elsewhere. Chichen Itza was a regional powerhouse, dominating the social, religious, and trade culture of the area until the twelfth century when Mayapán became the new capital.

The majority of my time here was spent in the upper portion of the map below which includes the Great Ball Court, Temple of the Skulls, El Castillo, and Temple of the Warriors. 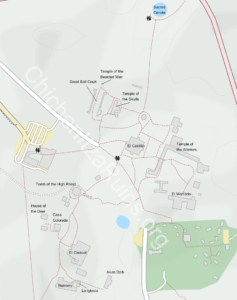 Chichen Itza is an extraordinary set of archeological treasures. There are 2.6 million annual visitors to this Unesco World Heritage Site. Be prepared for crowds, heat and humidity, not to mention the occasional passing shower.

The surrounding area is poor, depending upon tourist income for subsistence. One story buildings, many of them open to the hot, humid air line the road the Chichen Itza.  The pictures below were taken from a moving vehicle: 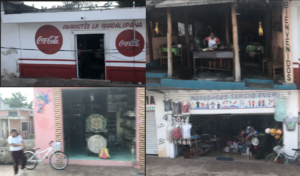 If you can stay overnight a sound and light show runs nightly. The show traces the history of the city and restores some of the original coloring that most likely decorated the buildings. (Their current grey/beige tones were once vibrant with color.) Tickets need to be purchased in advance or through a tour company such as Viator. 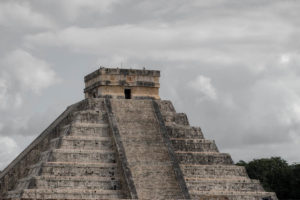 The Pyramid of Kukulcan (El Castillo) at Chichen Itza

The Mayans built two types of pyramids: One, with a flat top and a temple, was typically used for sacrificial rituals.  Untrucated pyramids were too steep to climb and were deemed to be sacred.

The Pyramid of Kukulcan (which translates into “Feathered” or “Plumed Serpent”), or El Castillo as it was called by the Spanish, is constructed with massive serpent heads at it’s Northwest base. Each year, at the spring and autumn equinox the shadows of the temple create the illusion of the serpent slithering along the side of the pyramid.

The shadow of serpent at the equinox Photo Credit: Wikileaks 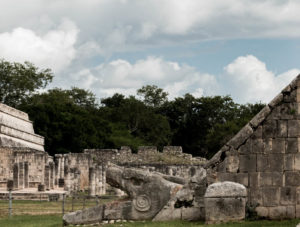 The large serpent head rests at the base of the pyramid.

Interestingly, the pyramid would seem to be built on another, older structure:

In April 1931, looking to confirm the hypothesis that the structure of the pyramid of Kukulkan was built on top of a much older pyramid, the work of excavation and exploration began in spite of generalized beliefs contrary to that hypothesis. On June 7, 1932, a box with coral, obsidian, and turquoise encrusted objects was found alongside human remains…

In April 1935, a Chac Mool statue, with its nails, teeth, and eyes inlaid with mother of pearl was found inside the pyramid… After more than a year of excavation, in August 1936, a second room was found, only meters away from the first. Inside this room, nicknamed the chamber of sacrifices, archaeologists found two parallel rows of human bone set into the back wall…

Researchers concluded that there must be an inner pyramid approximately 33 m (108 ft) wide, shaped similarly to the outer pyramid, with nine steps and a height of 17 m (56 ft) up to the base of the temple where the Chac Mool and the jaguar were found. It is estimated that this construction dates to the eleventh century CE.

The remains of this once great city are impressive. The Great Ball Court  is a massive playing field where games and competitions were held. 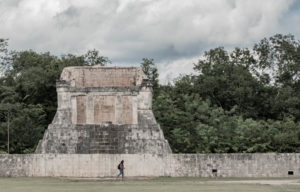 A view of the Great Ball Court at Chichen Itza

The Chichen Itza Ball Court is more than twice the size of a football field. It is so acoustically perfect that one can hear perfectly at either end of the field. The attention to acoustics isn’t limited to this stadium that was used for a variety of games; one can clap one’s hands in front of Kulkucan and hear the echo come right back.

Near the Great Ball Court the Skull Platform immortalizes the victims of battle and most likely the unlucky losers from the nearby ball court competitions. The carvings are somewhat gruesome, with vertically impaled heads carved into the long, low lying walls. 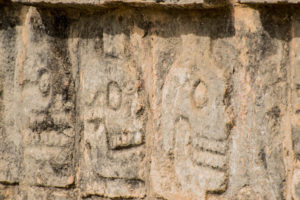 Detail of the Skull Platform at Chichen Itza 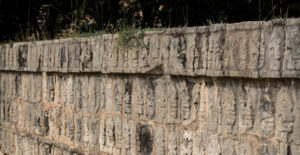 The Wall of Skulls

This three minute video from National Geographic provides a great overview of the site:

Chacchoben was another stop on my travels.

The extent of the civilization at Chichen Itza contrasts with the much older remains at the Chacchoben settled from 200BC, with structures dating from 700AD.   The city was discovered in 1972 by an American archaeologist, Dr. Peter Harrison, while flying over the land by helicopter, he noticed hills that didn’t seem to fit into the landscape. Over 2000 years of jungle growth obscured the structures which would be excavated and brought to modern light.

The site of the ruins translates a “Place of Red Maize”, the name of a nearby village. It’s original name has been lost with time. The earliest human settlements in the area of Chacchoben have been dated at around 1000BC. Studies made during the excavations suggest that the site was abandoned and reoccupied a few times, being finally abandoned at around 1000AD. Most structures that have been restored were modified several times during the occupation period with the most remarkable modifications dated at around 300-360AD.

The Mayan Ruins of Chichen Itza and Chaccoben
Cartagena and A Cup of Coffee
Photo Gallery: Cartagena
Cats, Roosters and Hemingway in Key West
Photo Gallery: Key West
Traveling The Timeline of Now 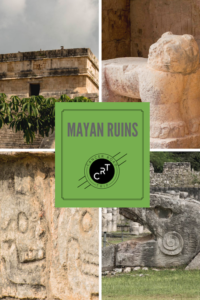