When the going gets tough, the tough go traveling!
An excerpt from Adventures By Sailplane
B.S. (By Sailplane) B.C. (Before Cancer)

I want to fly. It’s a glorious day and I have no airplane. This is not an acceptable state of affairs.

This weekend the club planes were suddenly unavailable. Sam and Johnny wanted to use them for an airshow and had not given me any warning. I woke up early, traveled to the airfield, only to find that on this most perfect day, I would be grounded. And I wanted to fly.

I had become an aviation junkie. And people who soar are absolute addicts. Like the worst drug addict, soaring pilots become so focused the sport that the other important aspects of life are ignored. AIDS (Aviation Induced Divorce Syndrome) is rampant and more than one pilot has been known to show up at the airfield on a good soaring day, rather than the obligatory office.

I cannot describe the driving compulsion one develops to get in a sailplane and be pulled aloft. There is something surreal, a suspense of reality associated with being pulled into the air to go soar.

Inspite of the occasional moment of terror low over unfamiliar terrain, or perhaps because of it, the lure of motor-less flight is irresistible. Once I started flying, I found myself always looking to the sky, always looking for signs of lift, often playing an afternoon of hooky when good flying weather appeared. Other people commented on the time of year; the coolness of the weather or the heat. I saw only soaring conditions. CU’s, good lift. A frontal pass, good soaring by the second day. Temperature inversion, doubtful. Soaring had started to dominate my life and the possibility of not flying on a flyable weekend was simply unacceptable.

Unable to fly, I left Kampel in a huff and headed south. Somewhere down here I knew there was another club, and I was going to find it. Information gave me the phone number. I punched the number into my car phone as I drove.

“Hi, perhaps you can help me. I’m looking for directions to the airfield, to the soaring club,” I inquired.

“Where are you coming from?” a friendly female voice asked. I told her I was on Route 15 South and she proceeded to give me detailed directions to the airport. I thanked her and drove on.

I drove along the ridge I could barely reach in the 1-26 I usually flew.  But I knew that the sky gods, the pilots in their sleek fiberglass ships regularly cruised the ridges for hundred of miles. I hear their chatter on the radio at Kampel and I read of their exploits in my monthly Soaring magazine.  They flew out of a field somewhere south, along this ridge. 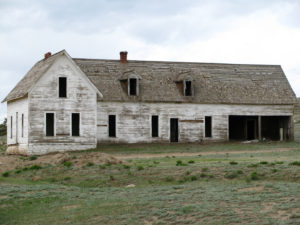 Turn at the white barn.

I drove, paralleling the mountains along the eastern edge of the Appalachians. I passed towns I’d never heard of: Heidlesburg, Bigglersville. I passed Gettysburg and crossed the Maryland border. Above the skies were blue with puffs of cumulus, taunting me on this perfect soaring day. I turned off in Emmittsburg and followed the directions I’d been given. Right at the white barn, the first turn in Pennsylvania, then left, straight and several miles down the road I came to the airfield. My tantrum over not flying earlier today had brought me to the Mid-Atlantic Soaring Society (MASA).

I arrived just in time to see a red and white pawnee power up and climb onto the runway. On the ground, waiting the completion of preparations for a tow, a sailplane dips a long slender white wing to the runway.

I watch, recognizing only parts of what I witness. It is a silent ballet, a process of launching and leaving, with its own set of rules and rhythms. Each airfield has it’s own silent symphony. Here, a young man runs to the belly of the glider and falls onto his back, head under the wing, hand in the belly of the aircraft. His free hand opens and closes, with the obvious assent of the pilot. The canopy is closed, locked and the pilot gives a thumbs up.

Out in the field someone gestures and the pawnee pulls forward. The arms of the man in the field rotate, giving the go ahead and the launch commences without a word. For the first few seconds the planes are out of sync. The tow plane gives a tug and the glider starts to roll. They are not in step yet. It takes a moment for the energy  to move from one vehicle to another, to translate from the plane to the rope, and from  the rope to the sailplane. Then speed comes quickly and the sailplane lifts off, skimming over the runway as it waits for its powered brethren to gain the speed it needs to fly. The tow plane breaks ground,and the two are off into the sky.

Off into the sky. That is where I wanted to be.

Sky Gods flew here, as I heard on the radio every weekend. Pilots in their gleaming glass ships, they flew over the valleys, into the mountains and down the ridges. Their occasional chatter sparked the airways, with sounds of task starts, landouts and two minute finish warnings. They seemed oblivious to gravity, to the fact that their planes had no engines. The radio chatter was full of their exploits which took them through numerous states each and every weekend. This was a world well beyond my own flying experience.

MASA has a reputation for unfriendliness and the sign flanking the entrance to the airport reinforces this reputation. Go away, it warns.  This airport is private property. Had I heeded the warning, my life would have turned out differently. But I was angry. I wanted to fly. So I pulled into the airport and joined the crowd that gathered along the flight line. 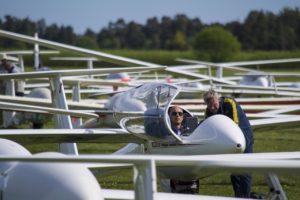 Planes line up on the grid, waiting to get towed aloft.

There are three runways. A paved strip in the center and two grass strips on either side. Lined up on the center runway were ten or fifteen gliders. This was the biggest collection of gliders I had ever seen. And they weren’t the clunky 1-26 or Blanik that I flew. These were long, sleek fiberglass ships. Theres were the ships of the Sky Gods.

The  crowd of people along the sidelines talked among themselves. They did not look friendly. One man turned, looked right at me as if making some sort of assessment known only to him, and looked away. It left me feeling awkward and uneasy, and  I wondered if I really wanted to do this.

Another voice among the crowd. “Hi. My name is Phil,” a fortyish many extends his hand in greeting.

Phil. My early friend who showed me great kindness in the club. He and his wonderful wife who would eventually give me a kitten to help replace the loss of my beloved dog.

Their house sits at the edge of the overrun and overlooks the airport. An aviators dream house. Complete with a hangar. The hangar was one of Phil’s midlife projects. We kidded him that he watched the movie “Field of Dreams” one too many times. Build it and they will come. So he build the mammoth hangar on his property at the edge of the airfield, figuring I guess that aircraft would come and fill it. That or the FAA would come and tear it down since it encroached on the overrun. Phil was good natured about it all.

“I fly at Kampel. And I was curious about what was doing on down here, ” I explained to my new found friend.

“Let me show you around. We’d love to have you fly here.”

“Thanks. Today I’m just looking for some information.”

“Come on, let’s go down to the office and we’ll get you all the information you need.”

The office is literally downhill, as is the entire airport. An important fact to note if you decide to land your airplane in that direction. If you are at all high, you are going to float a very, very long way, or until you hit the trees. 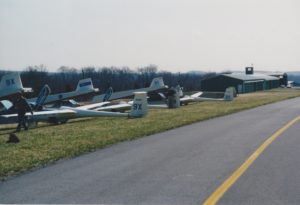 Planes line the roadway, rigging for the day’s aerial adventures

We drove down to the office, past two long, low rectangular hangars on the left. Trailer hangars. The sailplanes I had flown were just tied down in the grass over night. These ships came apart every evening and lived in long sleek trailers housed in these hangars.

Phil held the door open to the office and ushered me in. A few people wandered about, not paying us much mind. “This is Sharon.” Phil introduced me to the voice from the phone that had given me directions.

Sharon. Fifty-ish, cheerleader extraordinaire. She always look like she just got out of  a Talbot’s sale. Pressed, clean and  cheerful.

“Hi,” she offered her hand. “I am so glad you found us. Were the directions all right? Did you have any trouble finding it? The turn at Emittsburg can confuse some people, and the stop sign sometimes makes them turn back.” Quick words gush, followed by a ready smile.

“Here,” Phil gestured to me and offered some paperwork. “This will tell you what you need to know about joining.”

I took the paperwork and paused.

At that moment, I heard the tow plane’s drone as the next ship launched. Time stopped and my heart went towards the beat of the prop. This time a cub towing another sleek white ship flew by the window, six feet off the ground. I watched every inch of the take off roll. I looked to the sky. It  was blue, with puffy white clouds. There was lift everywhere and every fiber of my being wanted to being the air. I had to fly.

“How much do I make the check out for?” I asked. And I joined on the spot, oblivious to the consequences of my actions. 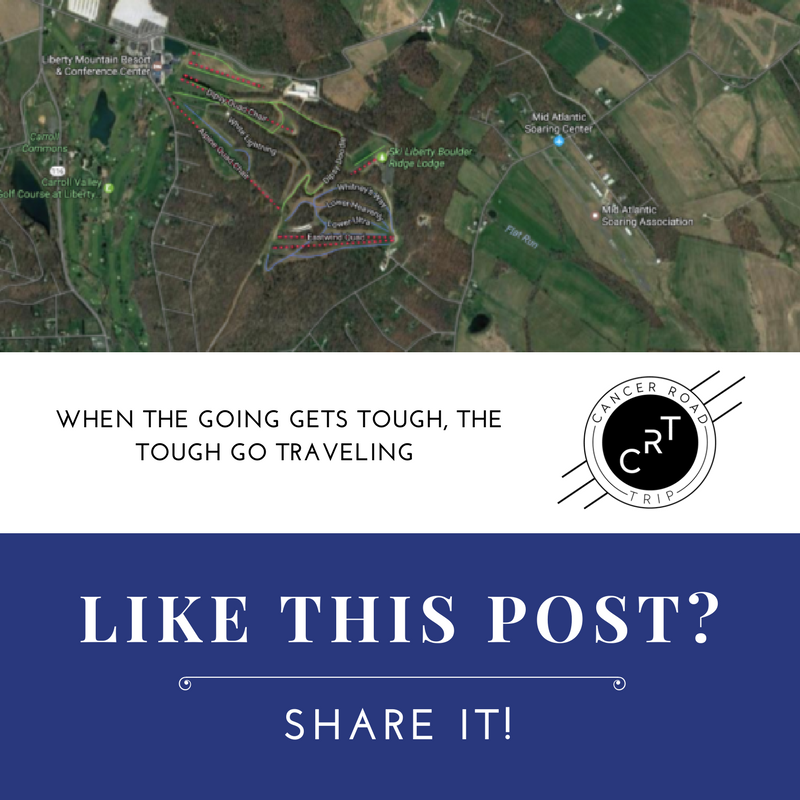