Inside The Georgia O’Keeffe House In Abiquiu 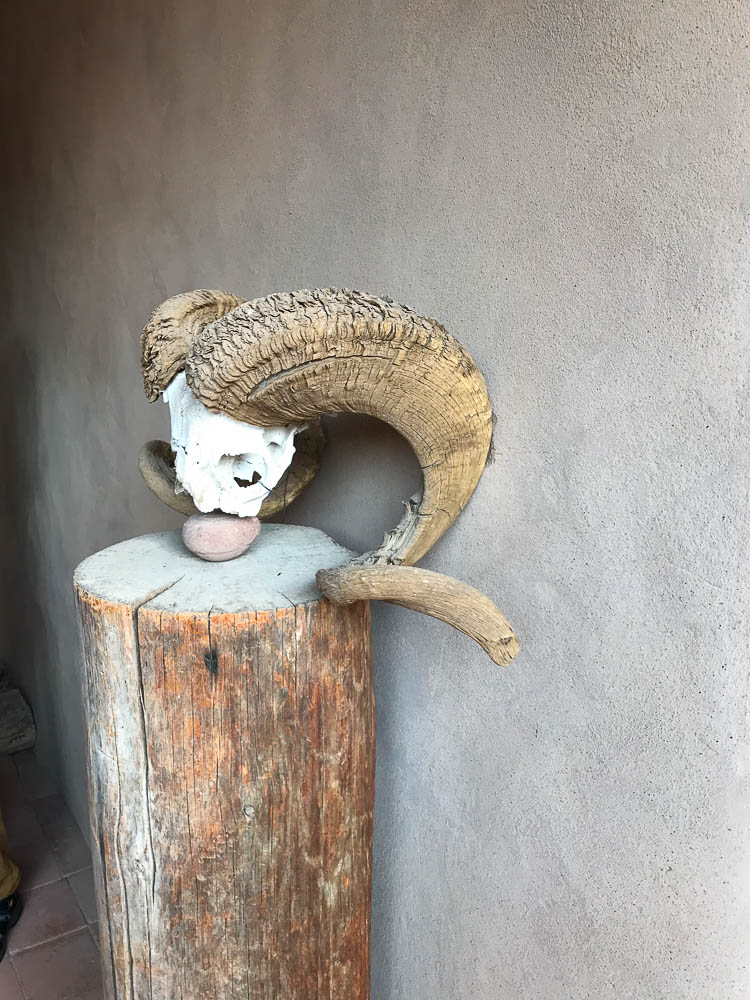 The O’Keeffe house in Abiquiu sits high on a ridge, with a breath taking view of the Chama River Valley. The Old Spanish Trail which linked Santa Fe, Mexico and Southern California starts its trek westward from this small village. The trail covers 700 miles of inhospitable terrain. It’s considered one of the more difficult trade routes ever established. 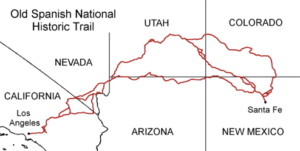 But Abiquiu’s history predates the Old Spanish Trail.  It was originally settled by Indians from Mesa Verde in the fifteenth century.  Later the Spanish arrived. The house that is now known as the O’Keeffe house in Abiquiu is a Spanish colonial compound that was most likely built prior to the Civil War.

The first look at the house was love at first site for Ms. O’Keeffe, but it was to be an unrequited love for quite some time. It took her 15 years to convince the Archdiocese of the Roman Catholic Church in Santa Fe to sell her the house. And when she finally obtained it in 1945, it was uninhabitable.

It would take four years under the guidance of trusted friend Maria Chabot to bring the house to life and for Ms. O’Keeffe to finally make it her primary residence.

In the meantime, she lived at Ghost Ranch. The house there is more remote; more primitive; with no garden, but many rattlesnakes. It is secluded. Guests from the dude ranch as well as visitors provided some company, but the austere aesthetic of the property is almost overpowering. 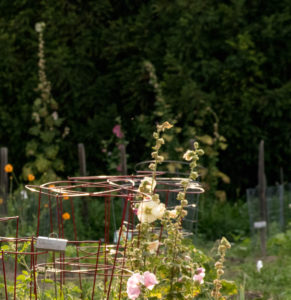 The garden at Abiquiu, late in the day 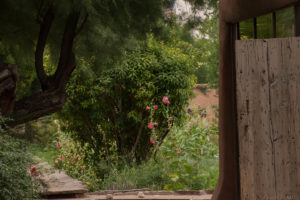 The garden at Abiquiu

The Abiquiu house is rich in character and in artifact. A fairly lush and somewhat unruly garden dominates the yard and once again extraordinary views dominate the rooms of the house. It was the garden that originally lured O’Keeffe to the property. And of course the possibility of the view. Her studio, which was originally used for livestock originally had no views. But with the renovation, a wall of windows was added and the room came to life. 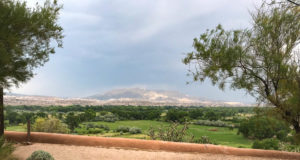 Panorama from the back of the O’Keeffe house in Abiquiu.

In this house, I felt that I met another aspect of Ms. O’Keefe. It was modern and very eclectic, combining adobe, art and artifact . Her love of cooking was reflected in the gadgets of the day that adorn the pantry and the kitchen. Top flight stereo equipment insured the best possible sound. Plus, of course, the breathtaking views facing east towards the mountains and The White Place (Plaza Blanca). 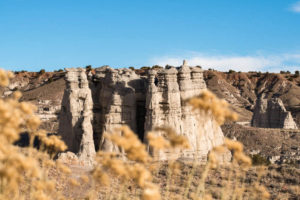 Plaza Blanca, aka The White Place

Yet bare light bulbs dangle from the ceiling; bones and skulls decorate the walls; and soft adobe creates the maze of entries and rooms that comprise the house. It is a curious and often contradictory combination of elements that together is totally captivating.

The O’Keeffe house in Abiquiu  is open to the public, although tours are available only part of the year, and limited in size. Here O’Keeffe established herself, until her health forced her to relocate to Santa Fe. During my visit, photos inside the house were not allowed; but just like at Ghost Ranch, exterior ones were permitted.

The exterior of the Abiquiu house is fairly unremarkable. It’s not particularly pretty or svelte. On the contrary it is (forgive me) a bit of a lump of adobe sitting on a hill with a breathtaking view.

But, once inside, oh my! What a lump of adobe this is!

The same eclectic, minimalistic vision is shared by both properties.

Both dining room tables are two simple pieces of plywood, which can be stacked for more intimate dining.

Both places picture her in austere black garb.

Both have drop dead stunning views.

But the Abiquiu house is more of a home. It reveals a side of O’Keeffe not evident in the Ghost Ranch house.  It is a colorful, organic and even nurturing place. The garden that originally caught her eye was expanded to supply an ongoing harvest of healthy food. Water is fed through stone waterways that meander throughout the garden; corn rises in a tall line to the back of the property. 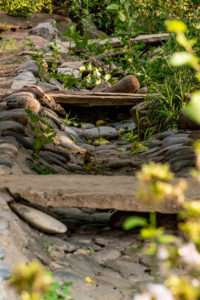 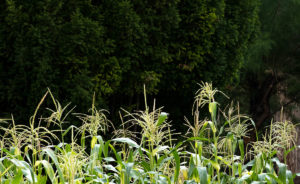 She may have pioneered smoothies, with her home-made yogurt and fresh fruit, a favorite morning snack. Canning supplies that extended her gardens produce into the winter months are stacked in boxes in the pantry. Pots and pans of various makes and sizes line the shelves and the walls.

Abiquiu is a remarkable house largely due to O’Keeffe’s reputation and aesthetics. It is on the National Historic Register and has been featured in numerous publications. But pictures don’t begin to convey the soul and comfort of this adobe home.

The living room in the Abiquiu house took my breath away. Every facet of the room beckoned one in. It was simultaneously sophisticated, simple, earthy and inviting. The wooden beamed ceilings provided warmth and texture; the sky lights, slanted pools of light; the casual built in seating seemed to arise from the adobe itself and be a part of the very soul of the building. If I could sit there, I am sure I would be in the embrace of all that was Georgia O’Keeffe’s Abiquiu. 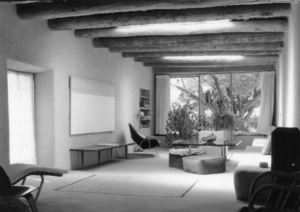 From the National Park Service, a glimpse of the living room in the Abiquiu House

But most of all it was the scale that made the room. Somehow the vastness and spareness contrasts perfectly with comfort in a way one can only feel. The light from the windows and skylights was at once dramatic and calming.

In the back of the house, the 2,000 square foot building that had been used for cattle was renovated to become her studio. A wall of windows was installed to celebrate the spectacular views of the Chama Valley.

Here, in this building, O’Keeffe’s Abiquiu bedroom is located. It is restful, with a lower, more intimate ceiling than the studio, the walls colored in a brown/taupe hue achieved by mixing dirt from Las Vegas, NM into the adobe. The room has two large windows that meet in a corner, very much in the indoor/outdoor sensibility of Frank Lloyd Wright.

And the windows reveal a stunning panorama.

Panorama from the back of the O’Keeffe house in Abiquiu.

In the main house, a courtyard  provides a walkway, a shelter and a place for contemplation. 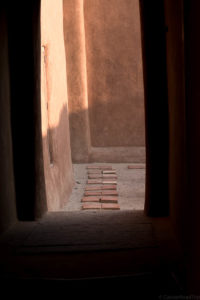 Walkway into a courtyard

Bones and antlers adorn the walls. A lone light bulb provides light in the main entry. 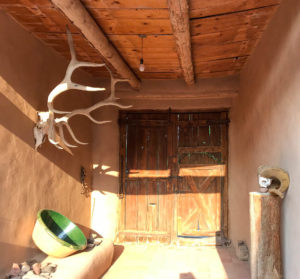 In short, it’s all very O’Keeffe.

The road leading to the house was once THE road. Its treacherous twists and turns and dusty climbs was the only route to Ghost Ranch.  It’s since been replaced by Route 84, a two lane paved road that allows you to cover this remarkable terrain in modern comfort. But it gives one insight into the conditions of travel between the houses early in O’Keefe’s stay in northern New Mexico. 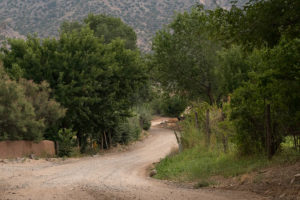 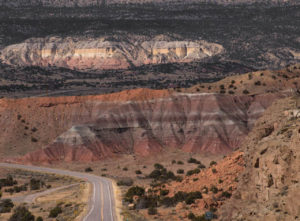 The modern day road from Abiquiu to Ghost Ranch

The twists and turns in the road certainly led O’Keeffe to interesting adventures. Perhaps one of her adventures was the bomb shelter.

As the crow flies, Los Alamos is not far away, and O’Keeffe was acquainted with the scientists tasked with atomic bomb development, many of whom took some R&R at Ghost Ranch. Perhaps this acquaintance is what led to the bomb shelter on her property. It sits buried in the back hill of her property, situated below the patio so as to not obstruct the view. It’s very rudimentary and would be a most unpleasant place to spend any time. Thankfully, it was never needed. 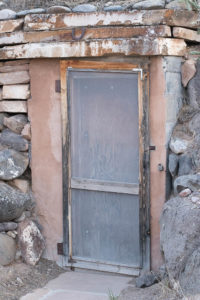 From bomb shelters, to luscious gardens, to skulls and rocks, Georgia O’Keeffe is a most interesting soul. A pioneering woman; an accomplished artist; and an adventurer. Her influence on art and Abiquiu continues to this day.

Georgia O’Keeffe changed the way we see things and put northern New Mexico on the map. While she was notoriously difficult to deal with, the legacy of her art transcends such quirks, and for all of us in this region and beyond, I think I can say we are deeply grateful she fell in love with this part of the world.

Some Views of Abiquiu Today

Abiquiu remains a sleepy village alongside the Chama River. But it continues to attract a quirky and talented group of people who call this place home. From the artists of the Abiquiu Art Project, to Bodes (a very quirky general store established in 1890 whose motto is “here a long time”), to explorers looking to find The White Place, Abiquiu sits at the cross road of past and present, along the Chama River.

Here are a few views of Abiquiu today:

More On The O’Keeffe House In Abiquiu

The kitchen in the O’Keeffe house in Abiquiu

This book highlights Georgia O’Keeffe’s creativity―not on canvas, but in the kitchen where she took great pride in her healthy culinary style. The meals served in her household focused on homegrown and natural foods. The author was Georgia O’Keeffe’s personal chef. This new edition features a new foreword by celebrated cookbook author and local food advocate Deborah Madison.

The life and times of Georgia O’Keeffe

Georgia O’Keeffe, one of the most original painters America has ever produced, left behind a remarkable legacy when she died at the age of ninety-eight. Her vivid visual vocabulary — sensuous flowers, bleached bones against red sky and earth — had a stunning, profound, and lasting influence on American art in this century.

O’Keeffe’s personal mystique is as intriguing and enduring as her bold, brilliant canvases. Here is the first full account of her exceptional life — from her girlhood and early days as a controversial art teacher…to her discovery by the pioneering photographer of the New York avant-garde, Alfred Stieglitz…to her seclusion in the New Mexico desert, where she lived until her death.

And here is the story of a great romance — between the extraordinary painter and her much older mentor, lover, and husband, Alfred Stieglitz. 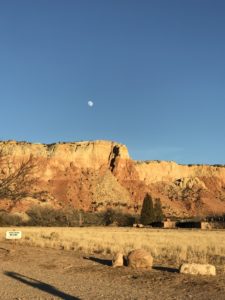 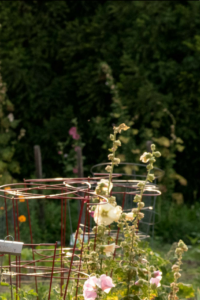 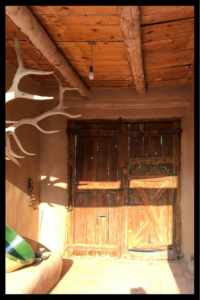