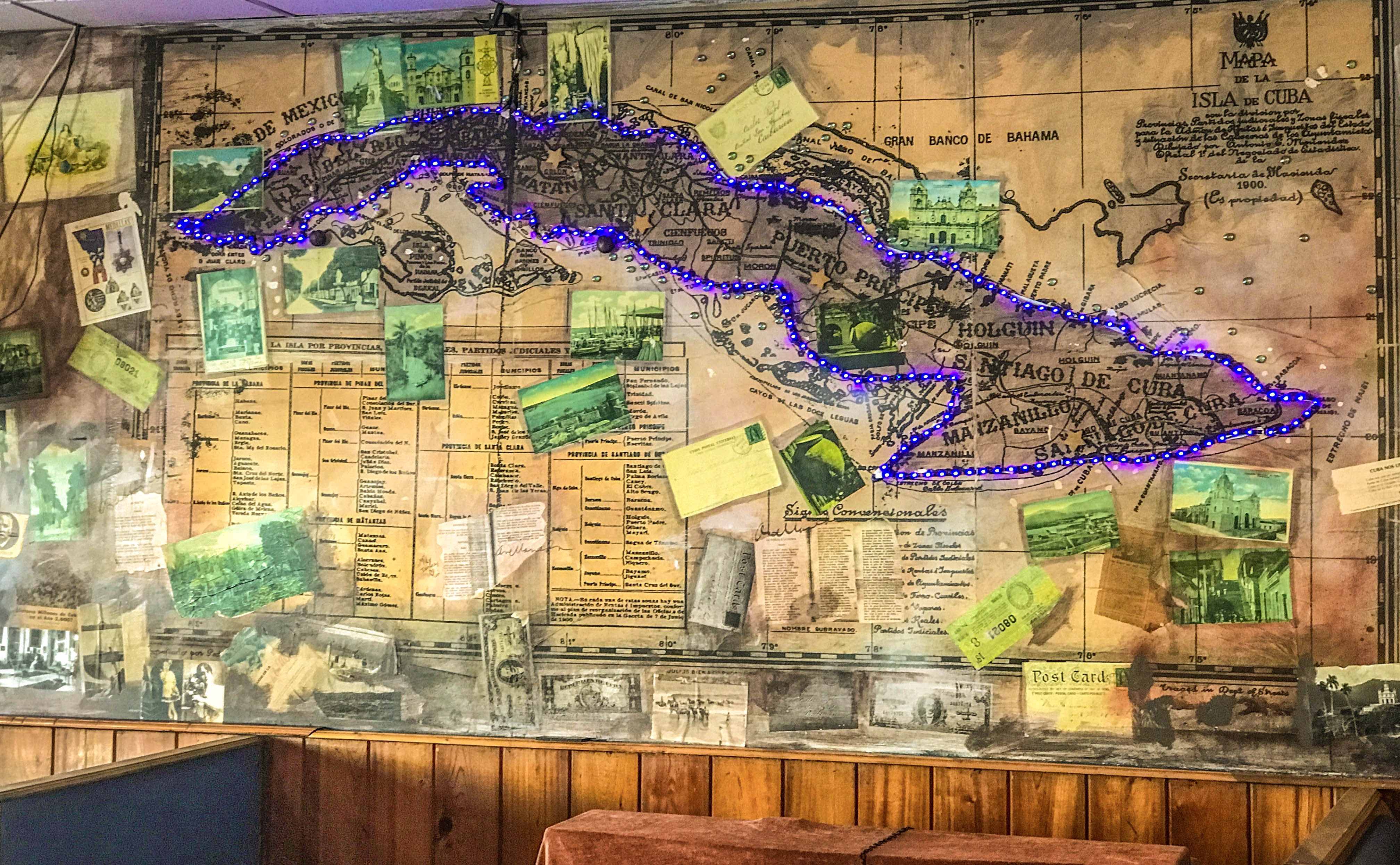 Little did anyone know that New Year’s Day 1959 would change the course of Miami’s history and the history of Little Havana.

Castro’s rise to power led to a wave of immigration, starting with upper middle class and wealthier Cubans looking to sit out the revolution in South Florida. But sitting out turned into settling in. And this migration transformed the ethnic and cultural map of Miami, taking it from a retirement backwater to an international Latin city.

While Latino culture is now integral to the Miami scene, the roots of this immigration wave start with the first wave of immigrants who settled in and around Calle Ocho (8th Street) to create the neighborhood known as Little Havana .

Nestled just west of downtown Miami, Little Havana is a neighborhood with soul and character. More and more in my travels, I am on a quest for soul. Not shopping, not tourist experiences, but the institutions, food, habits and people that make a place its own.

Little Havana’s soul grows out of the immigration of both the 1960’s and the 1980’s which embraced over 700,000 Cuban refugees who made it here, often in small leaky boats. Today, over 1.5 million Floridians identify themselves as Cuban.

Since that heyday, the area has seen some economic decline, and immigration from other groups seeking a spot in America. But the importance of this neighborhood—culturally and historically– is recognized if not designated on the National Historic Register who named the neighborhood on its annual list of 11 Most Endangered Places. In 2017, the Trust declared it a national treasure.

And a treasure it is. The combination of rich culture and politics have an inherently sticky quality, even decades later as people meet to share both over a game of dominoes in Maximo Gomez Park (aka Domino Park). 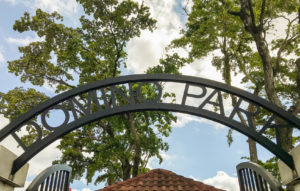 People meet in Domino Park to play dominos, share points of view and pass the time with friends. 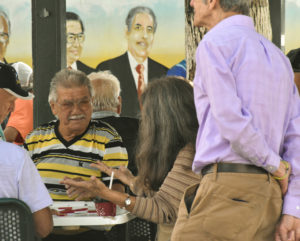 Any trip to Little Havana needs to start with a shot of Cafe Cubano to get the day rolling. That perfect intense blend of espresso-like bitter and sugar-sweet (from a perfectly dissolved cube of sugar) leaves your taste buds lingering for just a bit more. At La Ventanita the barista pours the thick liquid into little cups at a street side bar. Morning coffee here is an institution. 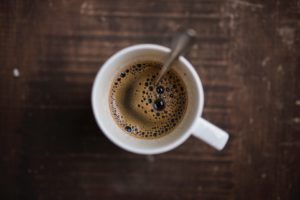 Photo by Asoggetti on Unsplash

An institution on the other end of the spectrum,  just up the Calle Ocho (8th Street)  is The Ball and Chain, a 1930’s club that hosted jazz notables including Billie Holiday, count Basie and Chet Baker. Louis Armstrong and Ella Fitgerald are rumored to have performed here, but no solid evidence has been found. 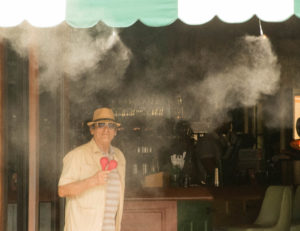 Salsa music, dancing and a bar with the most perfect mojito combine at the intersection of slightly seedy and historic.  It all feels so good.

Cooling mist pours from nozzles overhead under the green and white striped canopy. A band plays; a dancer dances. Fresh cane juice is squeezed for the most perfect mojito. In the back, a patio and stage offer an outdoor entertainment area.

Sit, have a mojito. Listen to the beat of the music. Outside of Cuba, this may be the best mojito you will find. And these days, who knows, it may simply be the best.

The Ball and Chain Saloon opened in 1935. The history of this establishment is nothing short of a microcosm of the history of the times through which it has lived. Click here to visit their website for a detailed account of the owners and the ups and downs of this Little Havana bar.

The day I visited it was late morning and already the music poured from the saloon onto the street. A dancer, a gentleman, salsas across the dance floor, beckoning the bystanders in:

See more Ball and Chain pictures in the Gallery section!

All sort of remnants of Cuba are intertwined in daily life. Along Calle Ocho, mom and pop shops, cigars, pressed sandwiches, art galleries and more reflect the culture of Little Havana.

A bit further down the street, hand rolled cigars from Pedro Bello’s Cuba Tobacco Cigar Company displays over 100 years of family ownership and their expertise in the art of hand rolling a cigar. 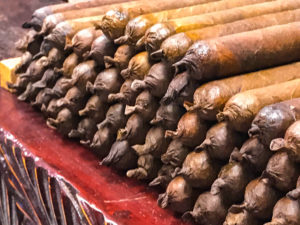 Pedro Bella is a legend of sorts. Many days he sits outside the shop, smoking his cigar, next to the wooden Indian where he poses for pictures and passes the day. Time seems to stand still on parts of Calle Ocho as old time craftsmanship and people lead the way forward. 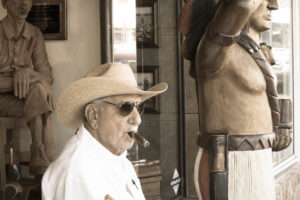 The food of Little Havana is, as you would expect, Latin with that wonderful Cuban flair. Taste an authentic Cubano sandwiche at Old Havana Restaurant; savor the sweet taste of guava perfection at Yisil Bakery; sip on guarapo at Los Pinarenos Fruteria.

At EL Pub, the Beef Picadillo Empanada is crunchy on the outside, with an unusual kick from the filing: olives that deliver piquancy and salt to the filling. The whole wheat pastry brings substance and savory to the pastry. A win/win on both counts.

And don’t overlook Azucar Ice Cream where the sweet mantecado is a must try. The owner, Suzy Battle, has perfected her grandmother’s recipes including one named after her,  Abuela Maria.

As well as great food and Little Havana institutions, you will undoubtedly run into roosters. They began showing up on Calle Ocho in 2002 as part of the “Rooster Walk” project by artists in the Little Havana neighborhood.

These feathered fellows show up in all sorts of forms and outfits. Some are bright colored; some are patriotically dressed. 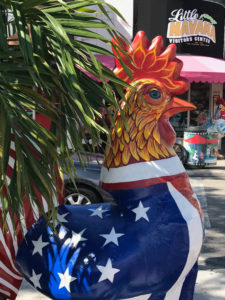 Cuba ia a country so close yet so far from the U.S. A mere ninety miles separates the two. From sea, the morning sun rises over this island nation. While the early immigrants have aged and their children have become the force behind the rise of Miami as a rich Latino center, Cuba still beckons.

Little Havana is a story of America starting in the 1960’s. It’s about immigration, assimilation, hope and dreams and the inevitable evolution of events with time. May the people of Cuba see their homeland again, up close rather than from afar. 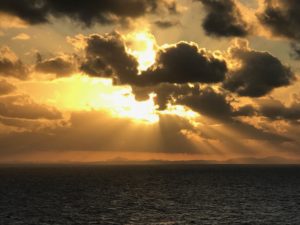 Look up Miami Culinary Tours. They offer a very nice walking tour that combines numerous culinary highlights with a bit of history.

Stay at the Ball and Chain for Happy Hour (Uber is everywhere in Miami! Stay and enjoy this amazing institution and its equally amazing concoctions.)

Walk the streets and enjoy the old world ambiance of Cuban via Little Havana. 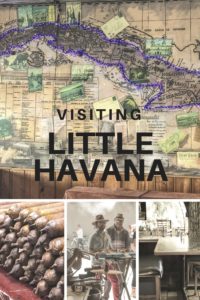