What to Do on Vashon Island? 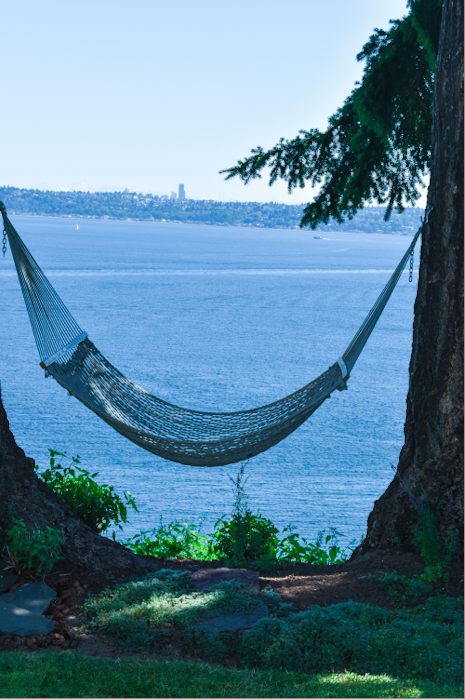 Vashon Island has the reputation of being rural and sleepy. It is, but there is also great depth and quality in some of the local offerings. Here are three things to do on Vashon Island that amused me!

The Vashon Island Farmer’s Market is held on Saturdays. It’s an eclectic, small town mix of local produce, music, beautiful jewelry, a food truck and several spectacular finds. Plus a local brewery. Plus tamales. Plus….

I love markets, so be prepared to visit a few with me. Markets give insight into the history, geography and culture of an area. They provide access to good fresh, locally grown food. And the people are great. They are all pursuing a passion.

Years ago in New York, there used to be a Forbes museum of people’s collections. Collecting is a passion, and I love people’s passions. I’ve encountered the mapaholics (like myself who are fascinated by the intersection of cartography and history); aviation junkies (luckily I could only afford one plane); a man with a passion for antique Thai coconut scrapers in form of rabbits; passions for jewelry; and on.

The Forbes Museum was very quirky. The collections ranged from somewhat frivolous (tin, cast iron, and paper toy boats) to sublime (think one of the world’s largest collections of Faberge Eggs). I believe these collections now rotate through various museums and the Forbes building. I bring this up because people of passion are great fun. You don’t need to share their passion to feel and enjoy their focus and energy. And the people who sell their wares at farmer’s markets are passionate about their crafts. 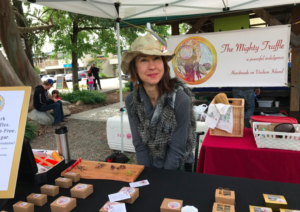 The Vashon market yielded some great finds and wonderful conversations. The Mighty Truffle Dessert Company is one of the finds.

I’m not a big chocolate lover (it’s a character flaw, I know) but I do enjoy an occasional indulgence and this chocolate company has the delicious answer. They are wonderfully, maniacally obsessed with sourcing their food products and it shows. Not only have they created an organic, gluten free truffle, but it has no processed sugar. The raspberry truffles are especially luscious, but I enjoyed all the flavors. Look for the Mighty Truffle. Mighty good stuff! 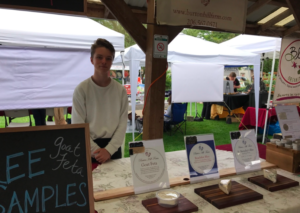 Several other stands were real stand outs. The goat milk feta offered at one stand was simply too good for words (think feta, watermelon, and arugula salad). And another vendor-Harbor Home Farm- offered carefully crafted semi-soft goat cheeses such as camembert. Mid Life Crisis Farm (gets my vote for best name) offers a wide selection of grass fed meats and meat products.

But it’s the goat cheese that makes my heart go pitter patter. I am a total sucker for goat cheese. I fell in love with it in France as a child, and have carried the preference with me my entire life. I remember one restaurant in Paris that would bring a massive, round woven flat basket to the table, laden with goat cheeses. This was my desert of choice, even back then.

Given this childhood culinary education, I had no choice but to become aware of and interested in food.  I never ate much junk or fast food, but I used to consume a lot of (too much) dairy and red meat. I grew up in an area with local farms, so I didn’t really think much about the source of my food. As I got older, I didn’t pay much attention to ingredients in the few processed foods (such as yogurt, soups and tomato sauces) that I did buy. Now, after a cancer diagnosis and a re-education in healthy eating,  I read every label, and buy “real food”, as fresh as possible.

My diet these days is vegetable rich and low glycemic. Little to no dairy, sugar, white flour, white rice or white pasta. In changing my eating habits, the hardest part was eliminating the dairy. I felt great, but life without at least some cheese just wasn’t worth living.

But in goat milk products, I found a happy compromise. The cheeses (and yogurt) are characterized by smaller, easier to digest molecules, and are less inflammatory than cow’s milk products. So you can imagine my surprise and delight to find not one, but two goat milk product stands at the Vashon Market. 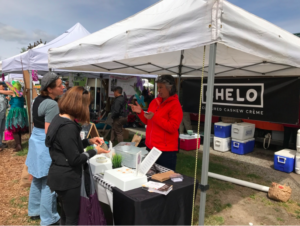 I didn’t get to the tamales which sounded great (but a higher glycemic choice, so I passed) but Chelo  is another must visit stand. The Chelo cashew creme product line was created by Vashon nutritional nutritional therapist Chelo Gable, as a cheese alternative for offer her dairy sensitive clients. It’s rich, full of flavor. From her website:

“The process of making the cultured cashew crème begins with adding live cultures to whipped cashews, then allowing it to ferment for 2-3 days.  During this time the beneficial bacteria consumes the sugars in the cashews and transforms the texture and taste from light and sweet to thick and savory.  Any combination of herbs and spices can be added to infuse flavor into the whipped cashews.”

​The herb combinations Chelo offers are beyond delicious. I’m heading back for more of the cilantro-garlic this weekend, to put on top of some fresh salmon. And I think I’ll pick up some asparagus from one of the local farm stands too. If you don’t like to shop, Vashon Fresh will deliver to your door.

Vashon Island: A Walk On The Beach

Vashon-Maury Island was named by  Captain George Vancouver of the British Navy in 1792 when he sailed into Puget Sound on the Discovery. He named the island after his friend captain James Vashon, who would later become an Admiral. The first American expedition in 1841 was led by Lieutenant Charles Wilkes, to make detailed maps of the area. Wilkes identified Maury Island as distinct from Vashon and named it after one of his surveyor’s Lt. Williams L. Maury. 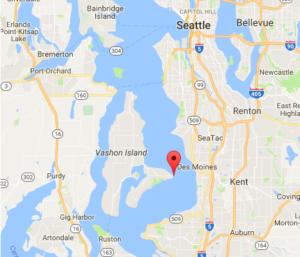 Vashon’s early history is not well documented. It was settled 6-10,000 years ago by native inhabitants. After the European and American discoveries, the 1880’s brought boat building to Dockton on Maury Island. Dockton was a residential neighborhood that supported the Puget Sound Dry Dock Company, which was the largest ship yard and dry-dock on the west coast  from 1892 to 1909. As ship building in Dockton declined, a cannery was built, but this also eventually closed as the volume of salmon decreased. Agriculture was a dominant industry as well, with steamers, and later ferries,  providing access to mainland markets. In 1918, Maury was officially connected to Vashon, and today Vashon often refers to both islands, which are the largest in the Puget Sound south of Admiralty Inlet. 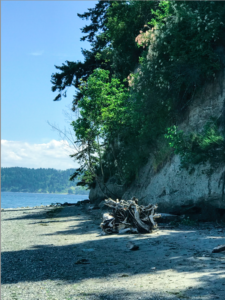 Vashon has numerous beaches. At low tide, some offer extended areas to walk. Since I’m trying to get more exercise into my life, and my excuse du jour, lacking a sport, is walking. And my motivation to walk is to take pictures.

There are a number of good beaches for walking and exploring. KVI beach offers great walks.  Lisabeula Park is a great place to launch a kayak. Perhaps the most visited beach is the one in Point Robinson Park, where the lighthouse resides and where the whales gather at the point of the island.

The Point Robinson Lighthouse, built in 1887 and on the National Historic Register, is officially on Maury Island. The beach that wraps around the point offers excellent walking opportunities and incredible views. It’s also one of five lighthouses in the state of Washington where visitors can stay in the original lighthouse keeper’s buildings. At Point Robinson, there are two keeper’s accommodations for rent. 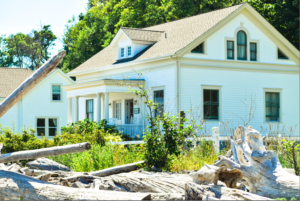 Point Robinson Lighthouse cottage is for rent on Vashon

Lighthouses are interesting structures. They’re usually located in fairly isolated locales, at the tip of a point or on a blustery cliff. The Point Robinson Lighthouse sits at the tip of Maury Island and provides a pulsing light that guides boats past it’s point. 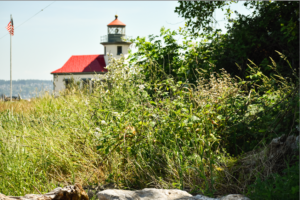 Each lighthouse has a distinctive light pattern so that’s it’s easily identifiable from the sea. The lighthouses were strategically located along Puget Sound so as to provide guidance, but not overlap each other’s range of authority. The Point Robinson Lighthouse is strategic in that it marks a 90 degree turn in navigation for passing ships. These days, the original glass prism is replaced by modern technology. But the need for visual navigation remains, even with technology and gps. After all, have you ever followed Google maps only to find yourself on a strange path, or utterly lost?

For an island in Puget Sound close to high tech Seattle, you would think that communications and information would flow freely. Not on Vashon. It’s a throw back in many ways.

I kept seeing garden tour signs and handouts. Dates were hard to find. Was there a website? Finally the gentleman at the Hinge Gallery pointed me to the arts center for more information and hopefully ticket sales.

The Vashon Center for the Arts is a beautiful building. It sits at a four way stop intersection, south of town and north of the Tahlequah Ferry landing. It’s fairly new and an amazing addition to this island. 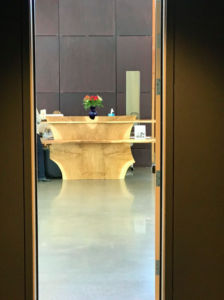 The reception desk at Vashon Center for the Arts

The reception desk inside the main entry is made from a tree that had to be taken down to build the building. The woodwork is stunning. As is the small but beautifully presented gallery just off the main entry. The building also has a theatre. And garden tour tickets!

The tour is self guided, over two days and takes you to various private gardens on the island, ranging from wild and wooly, to highly refined. And in the background are a variety of views, of Puget Sound, of Seattle and of the beaches.

My personal favorite was a fairly eclectic, meticulously crafted garden complete with grecian columns, an asian inspired lantern and a glass gardening shed. The attention to detail, in the materials and in the design was evident. 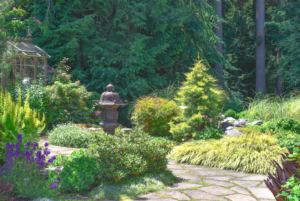 All the gardens were different; all were fun; and all were interesting. Area artists display their wares as well, making for a fun afternoon exploring the island and its arts.

I get the sense that while Vashon seems simple, there’s more than meets the eye on this island. Secluded among the rolling hills and rocky beaches, there are numerous people with interesting backgrounds and stories to tell. I recently found out that Jo Robinson, author of Eating on the Wild Side: The Missing Link to Optimum Health

lives here, but I don’t think I’ll have time to track her down. It’s just one more reason to come back to Vashon. 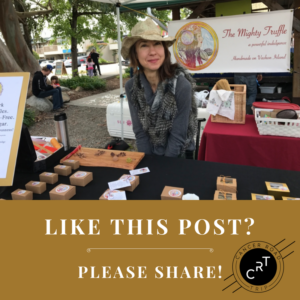