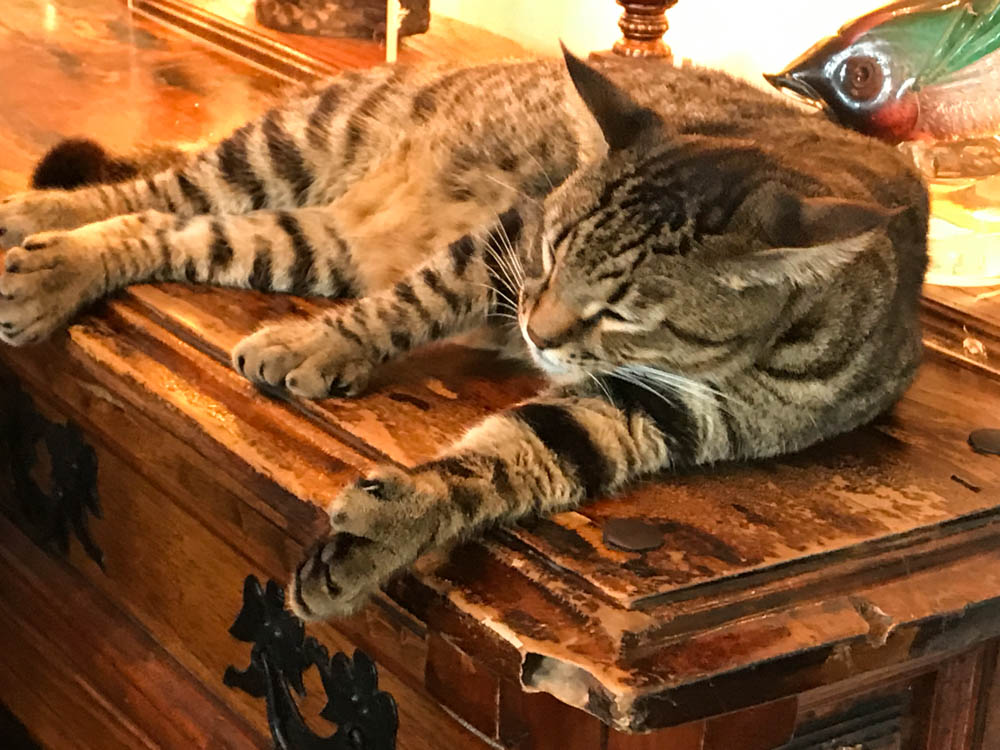 In the distance, roosters crow at dawn as the thrusters of the ship rumble to life, docking at Key West, home of Hemingway, six toed cats and wild chickens that roam the streets and cafes. 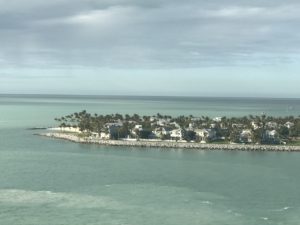 Key West has the reputation of being a laid back island, just 90 miles from Cuba. It’s the furthest west of all the Florida Keys and just 4.2 square miles. But perhaps its greatest claim to fame is as the home of Ernest Hemingway from 1931 to 1939 where he lived with his second wife Pauline.  It was here, at 907 Whitehead Street, across from the Key West Lighthouse that he wrote some of his best known short stories and novels including To Have and Have Not and Green Hills of Africa, a work of non-fiction.

His home was built in 1851 in the Spanish Colonial style. It has been fully restored and is now open to tours (bring cash, they don’t accept credit cards). The house and grounds are beautiful. In a small bungalow next to the house, Hemingway wrote. For years a cat walk connected the small office with the main house… 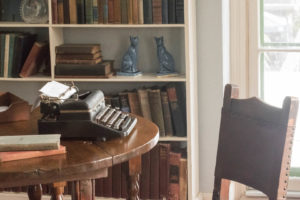 and of course, the six toed cats! 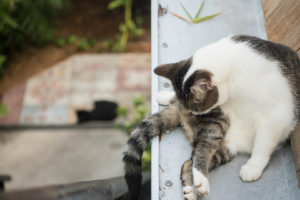 The six toes cats present on the property today are the result of a gift and a careful breeding program run by the museum management. The original cat, Snow White was a gift from  a sea captain named Stanley Dexter in the 1930’s.  Sailors believed that polydactyl cats were good luck, and perhaps they are. Irma’s recent Caribbean rampage left Hemingway’s house relatively unscathed. 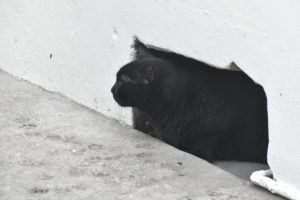 Howard Hughes, one of the polydactyl (six-toed) cats at the Hemingway House in Key West

Forty to fifty six toed  cats wander the grounds at will. All are named after movie stars of Hemingway’s period. So one might find Cary grant chasing Fred Astaire or Ginger Rogers hanging with Lauren Bacall. They are well socialized (except for Howard Hughes who is a bit of a recluse, hanging out alone in the basement).

One of the best stories to come out of the house is the story of the massive swimming pool which in 1938 cost $20,000. It was the only  pool within 1,000 miles. Poet Elizabeth Bishop, a friend of Hemingway’s wife Pauline, wrote of the famous pool in one of her letters to Robert Lowell:

“ . . .The swimming pool is wonderful -it is very large and the water, from away under the reef, is fairly salt. Also it lights up at night -I find that each underwater bulb is five times the voltage of the one bulb in the light house across the street, so the pool must be visible to Mars -it is wonderful to swim around in a sort of green fire, one’s friends look like luminous frogs . . .”

The swimming pool was also very high maintenance. The salt water would have to be drained every few days, the pool scrubbed down and then the refilling process would start again. According to the Hemingway Home website,  and contrary to many stories, the pool was actually the mastermind of Ernest, not his wife Pauline who would be stuck overseeing the project while Hemingway’s travels as a war correspondent took him overseas during the Spanish Civil War. Hemingway is said to have commented “Pauline, you’ve spent all but my last penny, so you might as well have that!” He flipped a penny into the air, and it landed on the concrete where it would be permanently embedded in the patio. 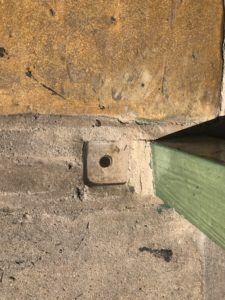 Hemingway is at once a galvanizing and polarizing figure. His larger than life persona of traveler, adventurer, gambler, drinker, womanizer– a “manly man”– the perfect “synthesis of brain and brawn”.

“To me heaven would be a big bull ring with me holding two Barrera seats and a trout stream outside that no one else was allowed to fish in and two lovely houses in the town; one where I would have my wife and children and be monogamous and love them truly and well and the other where I would have my nine beautiful mistresses on nine different floors.”  –Ernest Hemingway, letter to F. Scott Fitzgerald, July 1, 1925

There is no doubt Ernest lived with gusto. Yet this 1954 Nobel Prize winner killed himself July 2, 1961 at age 61.  He had bipolar disorder and possibly several other psychiatric problems as well. Dr. Christopher Martin, MD, a board certified psychiatrist in Houston, Texas, affiliated with Michael E. DeBakey Veterans Affairs Medical Center and an Assistant Professor at Baylor College of Medicine has written a cornerstone paper on Hemingway and his psychological issues.

In this paper, Dr. Martin points out that some of the Hemingway myth begins to unravel.  His war record, for instance. Hemingway was only 18 when he volunteered in World War I. His defective left eye meant that he entered the war not in combat, but as a non-combatant. In Paris, he evidenced mood swings and a tendency to turn against those who helped him. In Africa a string of accidents left a string of questions behind.

Dr. Martin dives deep into Hemingways upbringing and adult bravado to look at the real man behind the legend. The best summary of this study is in the article “Being Ernest.” It’s a fascinating read, about the fascinating, if highly human, man behind the myth.

Regardless of where the truth might lie, Hemingway cut a swashbuckling figure in literature and life. Hemingway was remembered in a 1966 memorial in Sun Valley. The eulogy had actually been written by Hemingway for a friend, but it certainly applied to him as well:

Best of all he loved the fall
the leaves yellow on cottonwoods
leaves floating on trout streams
and above the hills<
he high blue windless skies
…Now he will be a part of them forever.

And today, the legacy of his six toed cats lives on. 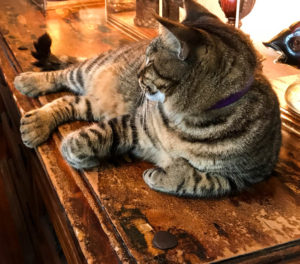 Roosters–or perhaps I should say chickens– roam Key West at will. That’s because the Cubalya chicken, a beautiful stately bird, was imported into Key West then later abandoned. They were originally imported for cockfighting, a popular Cuban pastime. But when the fighting was outlawed in the 1970’s the birds were left to fend for themselves. 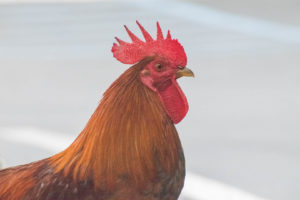 But onto garlic. Not necessarily with chicken (although that always has promise) but with shrimp for a spicy, light lunch.

Food is always a part of my travels. I’m inclined towards small bites with lots of flavor. Gone are the days of a plateful of food! Less is more, as long as taste isn’t comprised.

I stopped in a Caribbean restaurant–the name now eludes me–where I enjoyed a plate of garlic with shrimp. More or less in that order. A  few roasted peppers, topped with a sprinkling of parsley. And it was wonderful. Just right.

I sat and looked out over the sculpture park across the way. Chickens wandered here and there. One wandered right into the restaurant. No one seemed to mind. They are simply part of the landscape.

Key West has a strong tourist vibe, but when you get off the main shopping streets the roadways and architecture are captivating. The island’s Old Town historic district is comprised of almost 3,000 buildings and is believed to be the largest predominantly wooden historic district in the U.S. 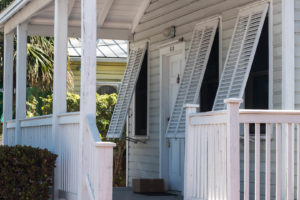 Part of the architectural history of Key West is the conch house. Conch houses are built of wood, set up on posts. This allows air to circulate, and water to pass under. Weatherboarding, low gabled or hip roofs and double-hung sash windows are common features.  Later victorian ornamentation would also be integrated into the island’s  architecture resulting in a charming island mix of color and style. There are numerous house pictures in the gallery on Key West.

In “To Have and Have Not”, perhaps in one of Hemingway’s more mercurial moods, he predicted the death of all that brought charm to the island:

“What they’re trying to do is starve you Conchs out of here so they can burn down the shacks and put up apartments and make this a tourist town. That’s what I hear. I hear they’re buying up lots, and then after the poor people are starved out and gone somewhere else to starve some more they’re going to come in and make it into a beauty spot for tourists.”    —To Have and Have Not

Thankfully he was wrong and Key West remains a gem of an island, particularly as you wander away from the tourist shops and into the neighborhoods and streets that lay beyond. 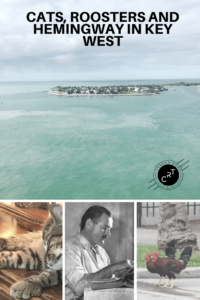