Click here to read more about my St. Augustine visit. 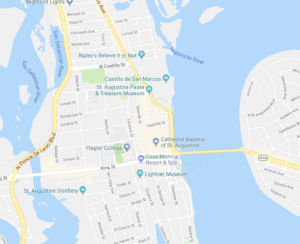 St. Augustine is a beautiful, historic town located on the Atlantic coast in northern Florida, southeast of Jacksonville.

I was lucky enough to visit in the lull before the snowbirds arrive. The actual dates of my visit were  October 25-26.

Here are some additional resources:

And here is some temperature information for Jacksonville Beach, which is just slightly to the north:

And some additional reading:

“Gaze at the buildings and read the accounts of the people who walked the same streets more than 450 years ago; you will be transformed into a time traveler.”—Thomas Graham, author of Mr. Flagler’s St. Augustine

“Grab this book—you will never find this information on a travel website.”—Kathleen Deagan, coauthor of Fort Mose: Colonial America’s Black Fortress of Freedom

In 2013, National Geographic Traveler chose St. Augustine as one of “20 must-see places and best trips in the world.” But while tourists take in the fort and stroll the cobblestone streets, few visitors are aware of the remarkable history of this oldest continuously occupied European-established settlement in the continental United States.

Walking St. Augustine fuses illustrated history and intimate handbook. The author, Elsbeth “Buff” Gordon, one of the city’s most highly regarded historians, is also a resident and offers insider tips for exciting adventures.

St. Augustine conjures up images of Spanish architecture, a massive fort, splashes of color against a backdrop of river and ocean, and always, always the omnipresent tourist. This ancient town, established along the banks of the Matanzas River in 1565, is the oldest city in America. Founded to protect Spain’s trade route from South and Central America to Europe, this colorful community was thriving years before the Pilgrims landed on Plymouth Rock and decades before Jamestown was settled. No other place in the United States embodies more charm than this hallowed city. Within these pages, images taken from the St. Augustine Historical Society’s archives will educate, enthrall, and entice history buffs, tourists, and residents alike. These vintage photographs will link readers to the past and transform them into more than mere spectators visiting a popular tourist attraction. Rediscover the Spanish connection and see how early settlers built their homes, harvested their crops, educated their children, and protected their land. Walk the same worn and winding paths that the town’s forefathers trod and acknowledge both the good and the bad times of life before modernday conveniences.

Take an enjoyable journey through one of America’s most beloved historical cities, rich with architecture and decades of multicultural influence. The history of St. Augustine is a long and memorable chronicle of a city that has existed for more than 450 years. Founded by Spain in 1565 and named San Agustín, the city continues to flourish in the 21st century. Despite destructive fires, floods, and colonial wars, St. Augustine still stands, proudly exhibiting its massive 17th century fortress, the colonial look of its old houses and streets, and the grand Guilded Age hotels. 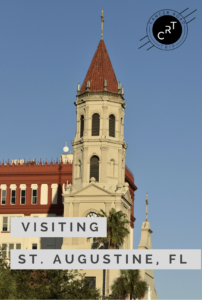