A photo safari focuses, naturally, on wildlife. But rushing by the windows of our vehicle was a rich life of its own. People in towns and along the roadways went about their daily life. In order to capture some of it, I started doing “drive-bys”, i.e. taking a photo from the moving safari truck.

I cranked up my shutter speed and using my 28-300mm lens, I shot from my window. Some photos are taken though the window. Together, these photos offer a glimpse of local life beyond the safari truck.

Like most people, most of my photos from safari are of wildlife. But I was at least as interested in the local culture.

Daily life in Tanzania, from what I observed, is far from our western norm. People are poor by our material standards. With over one hundred tribes in Tanzania, it is a varied culture. And modern conveniences such as cell phones appear in the middle of seemingly nowhere, providing connection that didn’t exist a decade ago. Where will all this lead? I would suspect that change in East Africa would be slow. And perhaps on some levels that is very welcomed.

The people I encountered were kind and helpful. At one point a running board on our safari vehicle came loose. Gift (our driver) parked our truck just off the road, by a near-by Masai village.  When he returned, all the men in the village returned with him. Their garb was bright and varied. Plaids and prints and solids mixed. Some of the men lacked teeth, but they all smiled as they offered suggestions to repair the vehicle. Gift jury-rigged the running board and our photo safari to the Serengeti was back on track.

Africa is far away from the madding crowd (unless of course you go during the annual migration where you may risk bumper to bumper safari vehicles hoping for that one iconic wildebeest migration shot). But my experience at the end of the dry season, at the beginning of October, was one without many tourists. Most of our days were spent seeing only a few other trucks. The only exception might be lunchtime, when the safari vehicles would congregate at lunch spots in the park. Then one might see a dozen or more trucks that would then disappear into the hundreds of acres of African bush.

I hope this gallery offers a glimpse of roadside life in Tanzania. 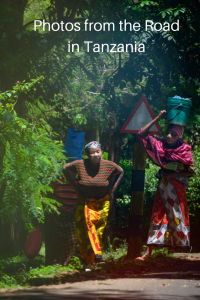