White Sands, New Mexico is a bit off the typical tourists’ track.

But it should be on yours.

It’s a unique geologic phenomenon: 275 square miles of gypsum dunes that mound and move with the wind in the Tularosa Basin of southern New Mexico. 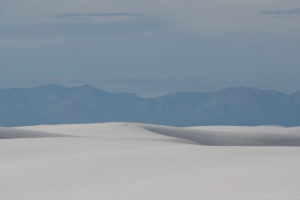 Gypsum is a soft sulfate mineral used in commercial applications ranging from drywall to Plaster of Paris. These particular gypsum fields were formed when the Permian Sea retreated millions of years ago. Weather and time have allowed this desert of gypsum to form. In 1933, President Hoover made White Sands a national monument.

The White Sands legacy goes beyond the dunes. At the northern edge of the park lies Trinity Site, the site of the first atomic bomb detonation in 1945. Today, part of the park is an active missile range. Testing periodically closes the dunes to the public. (Be sure to check on the White Sands website before you go!)

The desert like terrain of White Sands can be misleading. The endless, shifting shoals of gypsum, unlike sand, are not gritty or hot. They’re cool to the touch (even in the heat) and oh so soft.

Colorwise, the powdery substance ranges from white as snow to a soft vanilla, depending on the light. And across the surface, ridges form as the wind passes through. 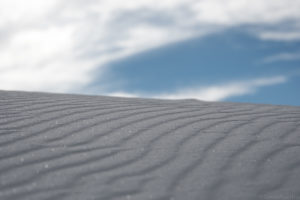 The wind creates waves in the sand at White Sands, NM

The dunes are dynamic. They move several feet a year, burying plants in their path. A few plants have learned some adaptive techniques, but the area lacks much of the desert plants found elsewhere.

Interestingly, the water table is just below the surface. That means that when it rains, pools form creating a network of small shallow lakes in the crevices between the dunes. This in turn encourages some plant growth.  Until, of course, the dunes shift and move with the wind. And the cycle repeats and continues. 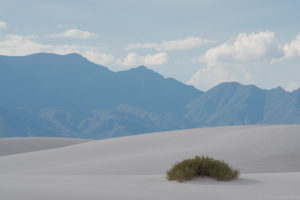 Plants grow in the dunes at White Sands.

Morning is my favorite time of the day and dawn at White Sands borders on a spiritual experience. Standing high atop the dunes, the sun rises, bathing the dunes in a soft light.

During my visit the remains of  Hurricane Willa were approaching from Mexico, bringing with it a weather system of clouds and rain. The rain was delayed a bit, but the morning clouds provided color and contrast to the pure white, undulating terrain. Pockets of sun would punch through the clouds, illuminating distant dunes. A curtain of rain showers could be seen approaching from miles away, and the air became heavy with the approaching storm. 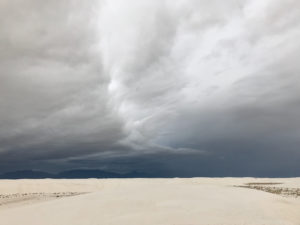 The enveloping silence, the endless dunes and the morning light were simply magical.

White Sands has a reputation for magical views. Evenings the park rangers offer a sunset walk–take it. You’ll learn about the park and get some amazing vistas as well.

For photo buffs, trips to White Sands are offered by numerous photography groups. One of the best known is that of Craig Varjabedian, a Santa Fe photographer whose passion for these dunes has produced a beautiful book, Into The Great White Sands.

White Sands As a Part of New Mexico History

Like much of New Mexican history, there is tension and conflict in White Sands’ history.

White Sands was “discovered” in 1849 by a U.S. Army expedition.  And ever since, the military and White Sands have had a shared history.

The White Sands Missile Range and Holloman Air Force Base border on the acres of gypsum. Indeed, errant missiles have been known to fall on the park and visitors may find their visits rerouted to accommodate military testing. And Trinity, the site of the original atomic blast, is located at the northern border of White Sands. It is open to the public twice a year.

This intermingling of military history and New Mexico surfaces again and again as one explores the state. The relationships between the Army, the arts and the Indians mingle and realign themselves through New Mexico’s history. (See The Santa Fe Opera: Music, Art and Tailgating for a story of how lingering World War II relationships still reverberate in today’s society.)

Many see White Sands as a unique world site worth preserving. In 2008, an effort was made to add the White Sands National Monument to a tentative list of World Heritage Sites.

The politics of competing local governments, townships, the military, the Mescalero Apache (who inhabited the general area long before the arrival of the U.S. Army) and other factions sidelined a World Heritage designation, but the historic district is listed in the National Register of Historic Places. And the park is open to the public, under the guidance of the National Park Service.

In addition to tourism, the Park is the site of numerous commercial photographic sessions. The fine white gypsum can be presented as either sand or snow in film, so a variety of advertising campaigns are filmed here. As are movies and even wedding pictures. Check with the Park Service for information on special use permits.

Bring plenty of water, a compass or GPS, and be prepared to be wowed. Don’t count on your phone for guidance; there is no wifi in the Park.

Hiking, camping and sledding are all available. Camping is extremely rudimentary –there are NO (I mean zero) amenities– but nearby Alamogordo offers plenty of hotel options. 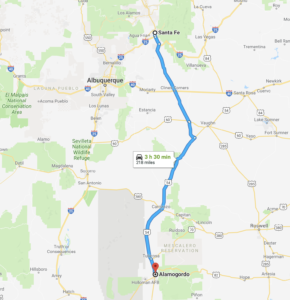 The route from Santa Fe to Almagordo, near White Sands

You’ll want to get away from the road to get to the more pristine dunes. The nearby dunes tend to be full of footprints, particularly at the popular sledding areas. Wear comfortable walking shoes and high socks to keep the “sand” out.

Be sure to bring lunch (there are no concessions at the park). But there are numerous picnic grounds scattered throughout the park that offer a bit of shade and shelter from the prevailing wind direction: 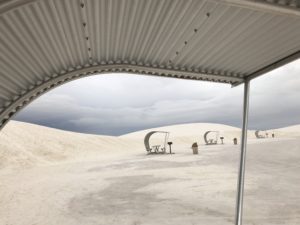 And the boardwalk offers access to the dunes for everyone, from young children to those in wheel chairs. 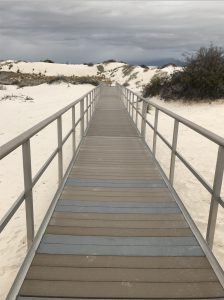 The climate can range from searingly hot to frigidly cold depending on the season.  Summers can get into the triple digits. The rainy season begins in July and runs through the end of September. December through February evenings are cold. Snow, wind and rain are all possibility. In the spring, strong winds and windstorms are not uncommon. Not to mention a bit of hail.

White Sands is one of those timeless places. One could spend a year amidst the white gypsum dunes and never see the same vista twice. It’s a living land of moving dunes, flora and fauna. The warm desert breeds massive clouds and the mountains provide stunning contrast to the moving sands at their base.

White Sands is part earth history and part human history.  But in this case, I think earth history wins out in its glorious 275 square miles of pristine gypsum.

“In every outthrust headland, in every curving beach, in every grain of sand there is the story of the earth.”

Just be sure to check the missile testing schedule before you go. 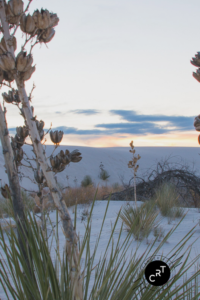