Visiting L.A. For the NATJA Awards 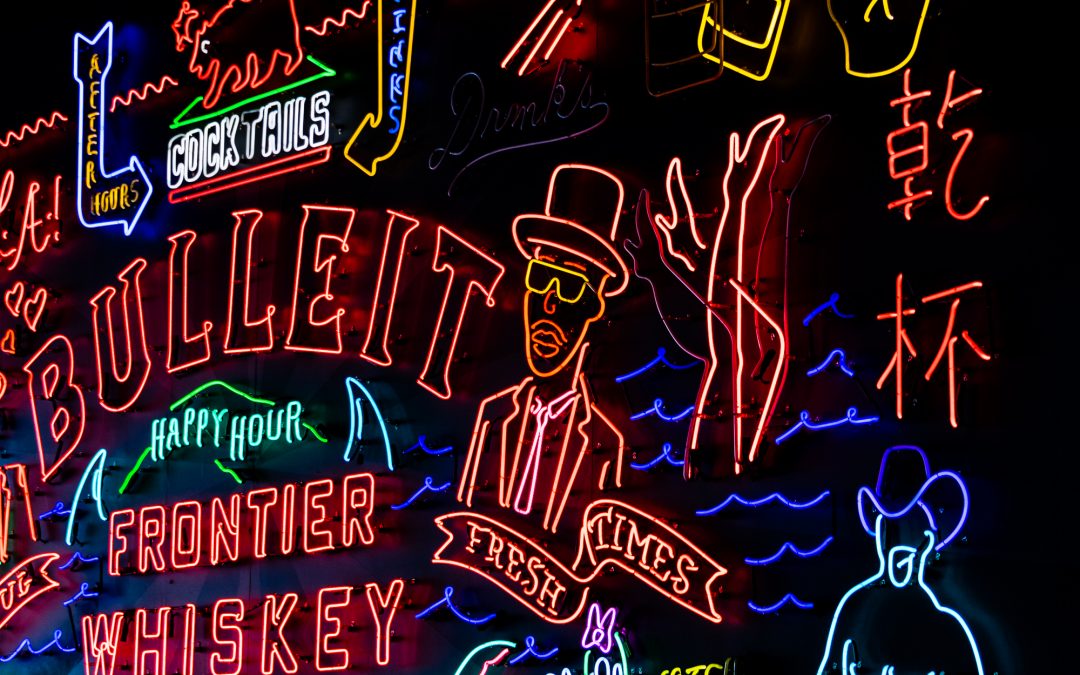 The NATJA Awards in Downtown L.A.

The NATJA  Awards (North American Travel Journalists Association) for travel writing were held on February 15th in L.A. this year. And I am immensely grateful to be one of this year’s award winners.

It was a short but fun trip. Here’s the itinerary:

I departed from Albuquerque. 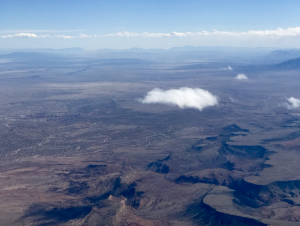 The New Mexico landscape from the air, looking south from Albuquerque

It is always a bit jarring to see the vast, seemingly endless New Mexican desert from the air. The expanse of sand and dust seems interminable. Were this to be my only view of the state, I would be rapidly on my way. Yet I know that just an hour to the north, nestled at the base of the mountains at 7,200 feet is the magic of Santa Fe. And to the south are the majestic landscapes of Bosque del Apache and White Sands.

But today all eyes are on L.A. I’m looking forward to a quick visit for the NATJA Awards and anything else I can conjure up.

The forecast is for rain.

I check the weather app, looking for windows without precipitation and plan my wanderings accordingly. 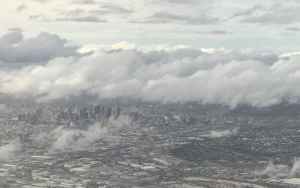 And, with a late afternoon arrival, I naturally focus on where to eat.

The dark skies have parted and the lights of Little Tokyo beckon. Living in the fabulous but land locked Santa Fe, I am on a quest for fish. For sushi. Or perhaps ramen. I walk, open to what I may find.

I have the name of several places jotted down and I pass Komasa. There is already a line, so I add my name to the list. 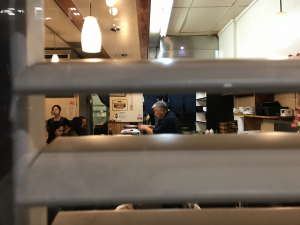 Peering through the blinds at Komasa, I watch the sushi being made.

The crowds are young and lively. Pleasant and polite. But then it is Valentine’s Day and many a couple are out for an evening meal. And I cannot think of a better place to go! My only regret is that I won’t have more time here, to explore not only sushi, but some highly acclaimed ramen dishes as well.

Numerous small restaurants, most of them fairly plain, offer all sorts of luscious looking food. The entry to one of the main arcades in Little Tokyo is decorated with lanterns that sway gently in the breeze. 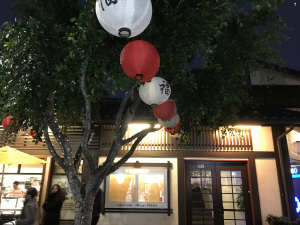 The entry to Japanese Village Plaza

I’ve opted this evening for sushi over ramen. Most of the sushi I have known has been characterized by much rice, packed too tightly. I didn’t know what to expect, but I was about to be pleasantly surprised.

A bowl of warm miso broth with clams wards off the dampness of the evening, and the sushi is superb. Fresh fish, not too chilled, over a small, perfectly cooked and formed mound of rice. Not too much rice; the fish dominates the dish. 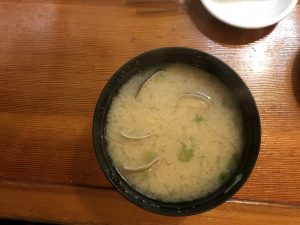 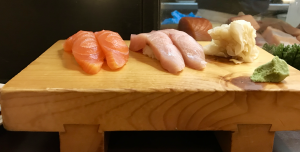 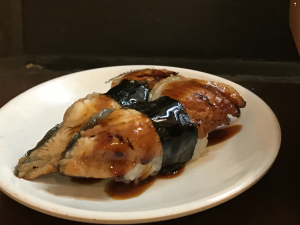 The pickled ginger is spicy, sweet and a little hot. It pops with a small explosion of flavor in my mouth. The tuna, salmon and unagi are simply sublime, as is a small eel and avocado roll.

Satiated and satisfied, it was one of those “life is good” moments.

So it was that my arrival evening included a wonderful culinary welcome to Downtown LA and the NATJA Awards.

The NATJA Awards are scheduled for this evening, Friday evening, so I have the day to myself. As an early riser, I decide to check out some of the market areas. The museums won’t open for hours, and the forecast calls for rain by early afternoon. So, enjoying a brief respite from the storm that is blanketing the entire west coast, I head out for the Flower Market.

But the Uber drops me in what seems to be a pretty marginal neighborhood. I slip my camera bag over my head and shoulders for security and I walk.

The Flower Market is more of a district than a location. It’s a working market, in a wholesale area and it doesn’t have the visual appeal of some of the more touristy oriented markets I’ve seen elsewhere.

So I continue to walk.

And eventually, some miles later, even for this person who doesn’t eat breakfast, it was time for some breakfast.

The Grand Central Market was on my radar scope, so I headed in that direction.

And I’m grateful I did. Because I encountered EggSlut. 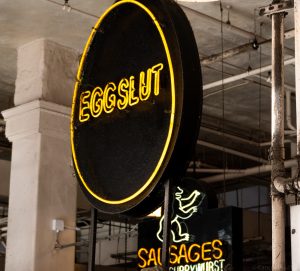 EggSlut opens to the sidewalk, where people take their luscious egg preparations to sidewalk tables, where they eat, chat and watch the world go by. 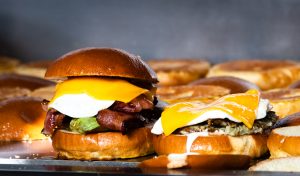 And this is why it’s called EggSlut. Really.

EggSlut started off as a food truck and has evolved into a series of popular L.A. eateries. Founded in 2011, it’s a “chef driven, gourmet food concept” focused on the egg. This EggSlut location, at the Grand Central Market, already had a line forming.  I queued up and regarded the menu.

The Fairfax, a ” cage-free soft scrambled eggs and chives, cheddar cheese, caramelized onions and sriracha mayo in a warm brioche bun”? (Which can be extra slutted up with avocado and bacon.)

I opted for my buttery, gently cooked eggs on a warm brioche bun topped with a bit of a mayo mixture, cheddar cheese and turkey sausage. The yolk oozed into the brioche, dripping slightly into the waxed wrapper.

With food like this, I could eat breakfast all day long.

If you’re in L.A. search out an EggSlut. You’ll be glad you did.

The Grand Central Market is best described as an upscale, cheap eats place, with some good food. Some of the food that wasn’t so good was (so sadly!) at The Oyster Gourmet which I later visited for lunch. The Oyster Gourmet was highly touted in any number of articles, but my experience was decidedly sub-standard. 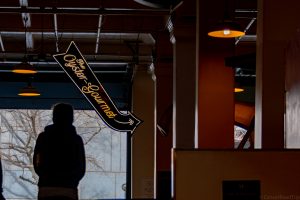 The sign points to oysters…but my experience wasn’t great

The oyster specials of the day were Sunset Beach (Washington); Paradise Cove (B.C.Canada); and Grey Pearl (Baja). Quite frankly one was more disappointing than the next. The Grey Pearls were too salty to be pleasant, apart from their nice, almost crisp texture. The Paradise Cove were also salty and lacked the wow of a great oyster. The Sunsets were billed as similar to a Kumamoto, but none of that lovely mineralogy was present.

I don’t know if it was an off day for The Oyster Gourmet, but these were honestly some of the most disappointing oysters I’ve ever encountered. Anywhere.

So, with the storm clouds gathering overhead threatening an ongoing deluge of rain for the remainder of the day, it was onto the Broad Museum. 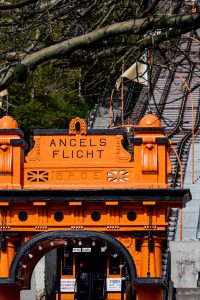 Angels Flight offers a lift versus a steep and long set of stairs.

Angels Flight is a 298 foot long, 117-year-old funicular that runs between Hill Street and Grand Avenue on Bunker Hill. Originally opened in 1901, it was billed as the world’s shortest railway. From the Grand Central Market, it offered something of a shortcut and an L.A. tourist experience, en route to my next stop at The Broad. (Pronounced BRODE).

The Broad is a contemporary art museum not far from Grand Central Market. It was still too early for the museum to open, but a standing line starts to form well before the museum opens. I spent a bit of time sitting, watching the people pass on the street, before I too joined the stand-by line. Should you visit L.A., you might want to consider ordering your tickets in advance to avoid the queue and guarantee access to certain exhibits. 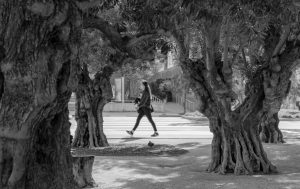 The trees provided a great frame for watching people walk by, as I waited for the museum to open 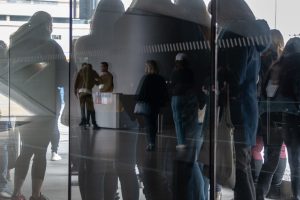 The standing line awaiting entry at The Broad. A view from the inside, out. 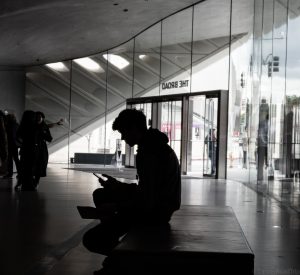 A young man silhouetted against the entry at The Broad

The exhibit that most intrigued me was Yayoi Kusama’s Infinity Mirror Rooms, of which The Souls Of Millions Of Light Years Away was available with a bit of a wait: 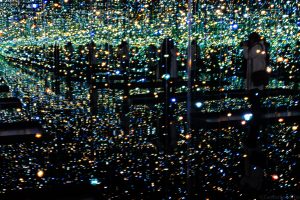 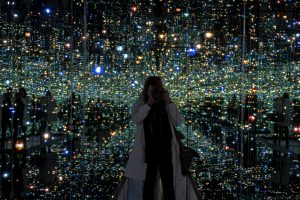 A rare picture of the person behind the camera, yours truly!

And then the rain recommenced.

I indulged in a late afternoon nap, then headed over the The City Club Los Angeles for the NATJA Awards Ceremony.

The City Club is located on the top floor of 555 Flower Street with a sweeping night time view of Los Angeles. And we were lucky enough to enjoy the panorama, as the clouds lifted and the skies cleared.

The room was filled with writers from all facets of life. And of course the Keith Bellows Award winner, Jayme Moye, whose adventuresome forays were a worthy winner of this prestigious award named after the long time editor-in-chief of the National Geographic Traveler. Jayme is the first woman to win this award. Former recipients of the award were travel writers  Andrew McCarthy and David Noyes.

I was honored to be among this fun loving, traveling and talented crew of travel writers.  Thank you NATJA for such a great experience!

Over one thousand entries were received. CancerRoadTrip won the following awards:

More Reading on Some Road Food 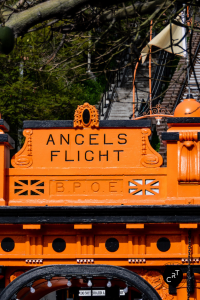 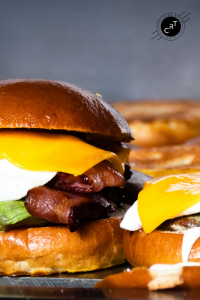